Last week I had the opportunity to attend a seminar hosted by the San Francisco Women’s Council of Realtors that featured an amazing panel of local pros: 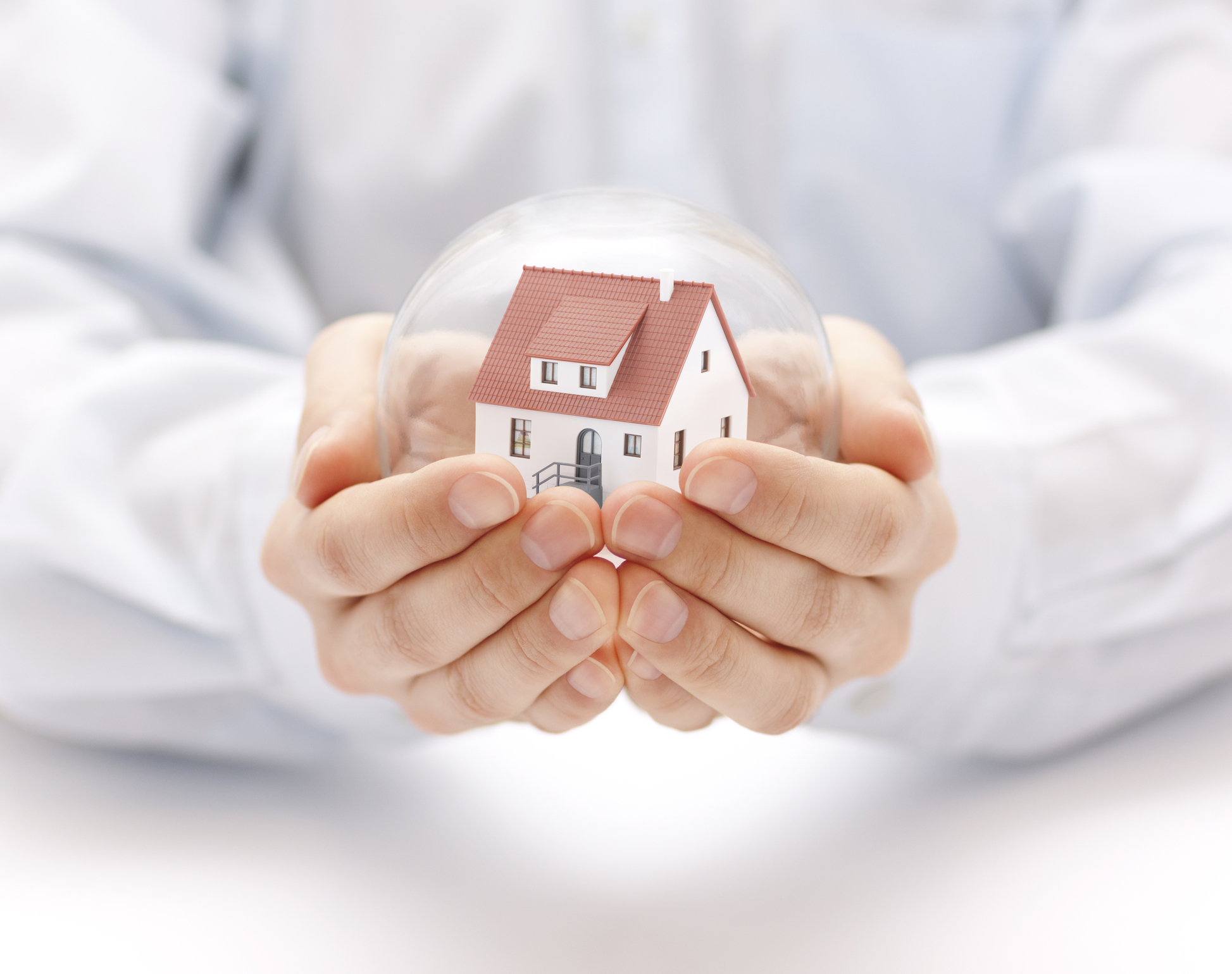 The focus of this moderated panel discussion was to examine the current and forecasted Bay Area economy and real estate market for 2019. It was a very instructive event, so I thought I would share some of the highlights.

The panel was asked to describe 2018 in a few words. Here’s what the panelists said: “Turbulent, Helluva ride, and End of Cycle?”

Patrick Carlisle reminded us of the cyclical nature of the real estate market. Specifically, that real estate cycles typically last approximately 7-10 years (though they could be shorter or longer). There’s usually a “recession” market lasting anywhere from 2-4 years, followed by an upcycle of 5-7 years after which the market plateaus and then begins the next cycle. “Timing” the market can be difficult except in hindsight, but Patrick pointed out that Spring 2018 saw peak pricing in San Francisco real estate. Political, social and economic events can also affect a real estate cycles (See: 2008) so anticipating the end of a cycle can be challenging.

2018, particularly year-end, was a turbulent year. By the end of the year the stock market was in the doldrums after a mercurial last quarter, there was a government shutdown and most of us were anticipating interest rate hikes going into the new year. The real estate market also softened for the second half of the year as buyers did not seem as willing to jump at the first property and significantly overbid. So properties tended to stay on the market longer.

On the positive side, the national economy grew by about 3% last year. If the economy continues to grow until June 2019 it will be the longest expansion cycle in history. Also of interest is that when you compare the S&P 500 with what was referred to as FANG (Facebook, Apple, Netflix, Google), the latter was a lot steadier than the former. This is good news for the Bay Area.

Currently the San Francisco Bay Area economy is steady with high salaries and low volatility. But it could become highly charged as the risk of volatility increases with tech under more international and domestic regulation scrutiny. We do have some insulation in “export businesses,” i.e., businesses where revenue is derived from outside the area, such as tourism. However, our economy could be tested if the tech industry falters.

If developers get funded, they will build. Currently it takes about 5 years to be fully entitled in San Francisco. In order to be economically viable, builders need to sell for at least $1400 sq. ft., which equates to about a $1million 1-bedroom condo. (In case you’re wondering why it’s so hard to build affordable housing in this city). Looking forward to the coming year will be a combination of condo and apartment projects from SOMA to the Shipyard that will list between $1400-$1500/ sq. ft. In addition will be some luxury opportunities that will come in at around $2500/ square foot. Whereas in years past when new construction units were highly competitive so there was no need for developers to negotiate, now buyers have a little bit of wiggle room for negotiation power as competition has increased. This is true for some, but not all new projects.

– National immigration issues: More than 50% of entrepreneurs in the US are foreign-born. 31% of Bay Area inhabitants are foreign born, and 40% of VC money historically has gone to the Bay Area. In other words, the Bay Area is steeped in VC funding and much of that goes to companies that are formed by foreign-born entrepreneurs. The current administration’s crackdown on H-1B visas could have an impact on the number of tech-skilled workers available to technology companies as well as those who start companies.

– Outmigration: While there aren’t any statistics yet on how many people have left, we’ve seen many people leaving the Bay Area due to the high cost of living, new federal tax laws that make it even more expensive to live here, and the increasing difference between renting and buying. Many are leaving the San Francisco Bay Area to states like Texas and Washington where there are no state income taxes. Entrepreneurs who might have started their company here in the Bay Area are now seeking greener pastures for affordability.

– IPOs: Several San Francisco based companies, including Uber, Airbnb, Pinterest, Lyft and Slack, are all planning IPOs in the coming year. Should they come to fruition no doubt there will be a class of newly minted millionaires and many of them will be seeking new homes. This could drive home prices up, particularly in certain neighborhoods where young techies tend to want to live.

Looking Forward Into 2019: There were varying levels of optimism and caution about what the coming year holds for the economy and the real estate market. Overall the economy is expected to grow about 2.5%, which is less than 2018 but still a healthy number. Important will be keeping inflation in check. As announced late last year, the Fed has backed down on its planned interest rate hikes, probably until at least until mid-2019, and will likely now only increase the rate once or twice vs the four times it increased in 2018. This will keep interest rates low, which is great news for home buyers. The potential downside is when interest rates are low, people tend to increase their debt, which could cause instability if the markets falter. Overall, the economy will see moderate growth and gains. As we head into the 2020 elections, the current administration will likely do all it can to keep the economy revved up and strong.

January sales are typically among the lowest of the year. That is because in real estate, the data is the result of what the market looked like 30-45 days prior. So January sales reflect what was happening and on the market in late November and December. In these months, sales are slower as sellers hold off until after the holidays, particularly in the higher-priced luxury market, and many buyers take a break as well.

The good news is that so far February seems to be picking up. We’ve gotten more inventory on the market and judging from the open houses I’ve hosted as well as chats with other agents, buyers seem to be out in numbers again. The stock market has steadied in the new year, the government shutdown is over, and the Fed announced that they will not be raising rates again until at least mid-this year. Perhaps this is leading buyers to have more confidence in the market.

Median sales price dipped in January. Single family home prices dropped to $1,376,599, which although down from the 4th quarter was still up compared to January of the previous year. Condos and lofts had a median sales price of $989,818, down 5.7% compared to the same month last year and the first time prices dipped under $1 million since January 2015. 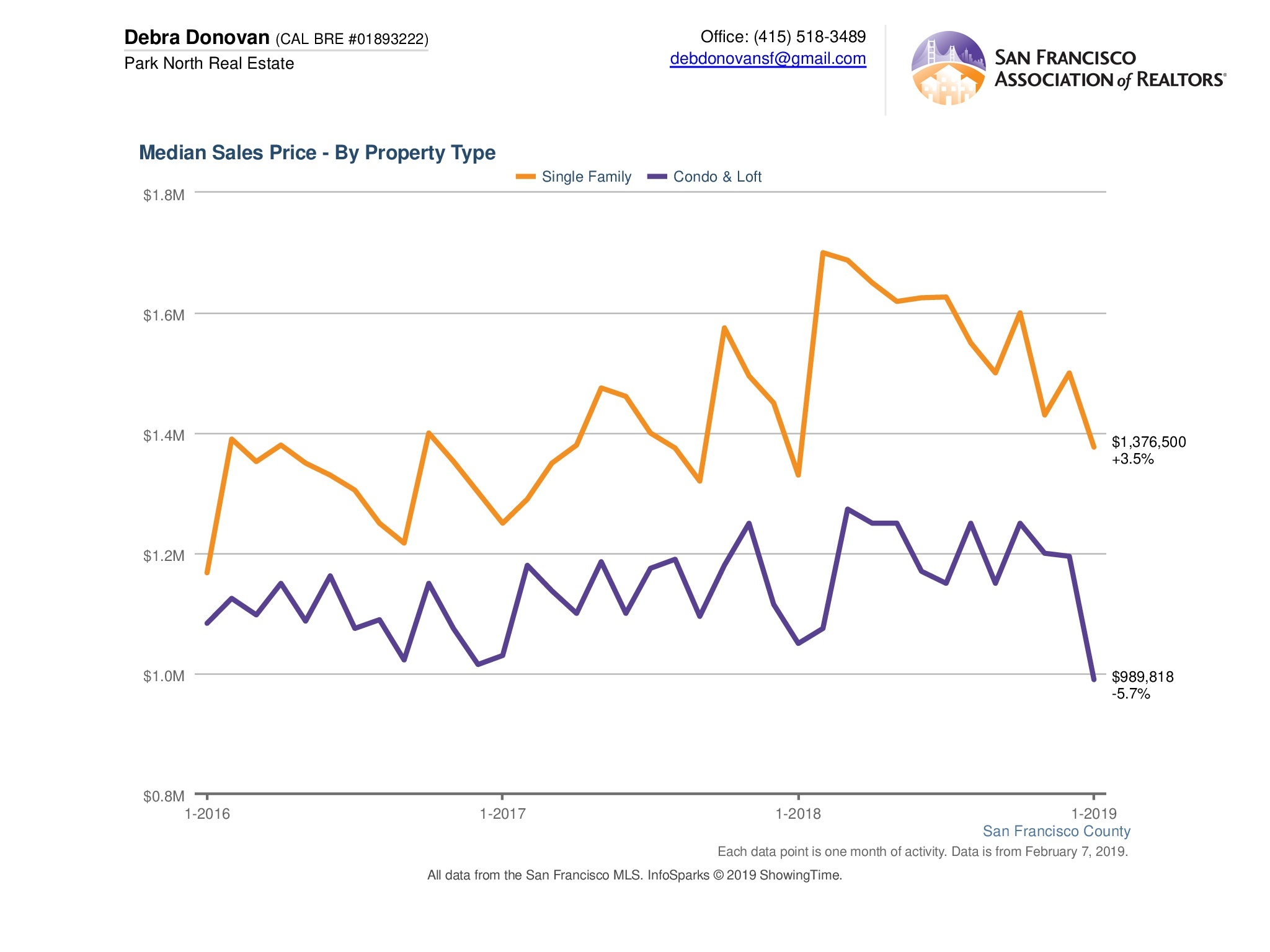 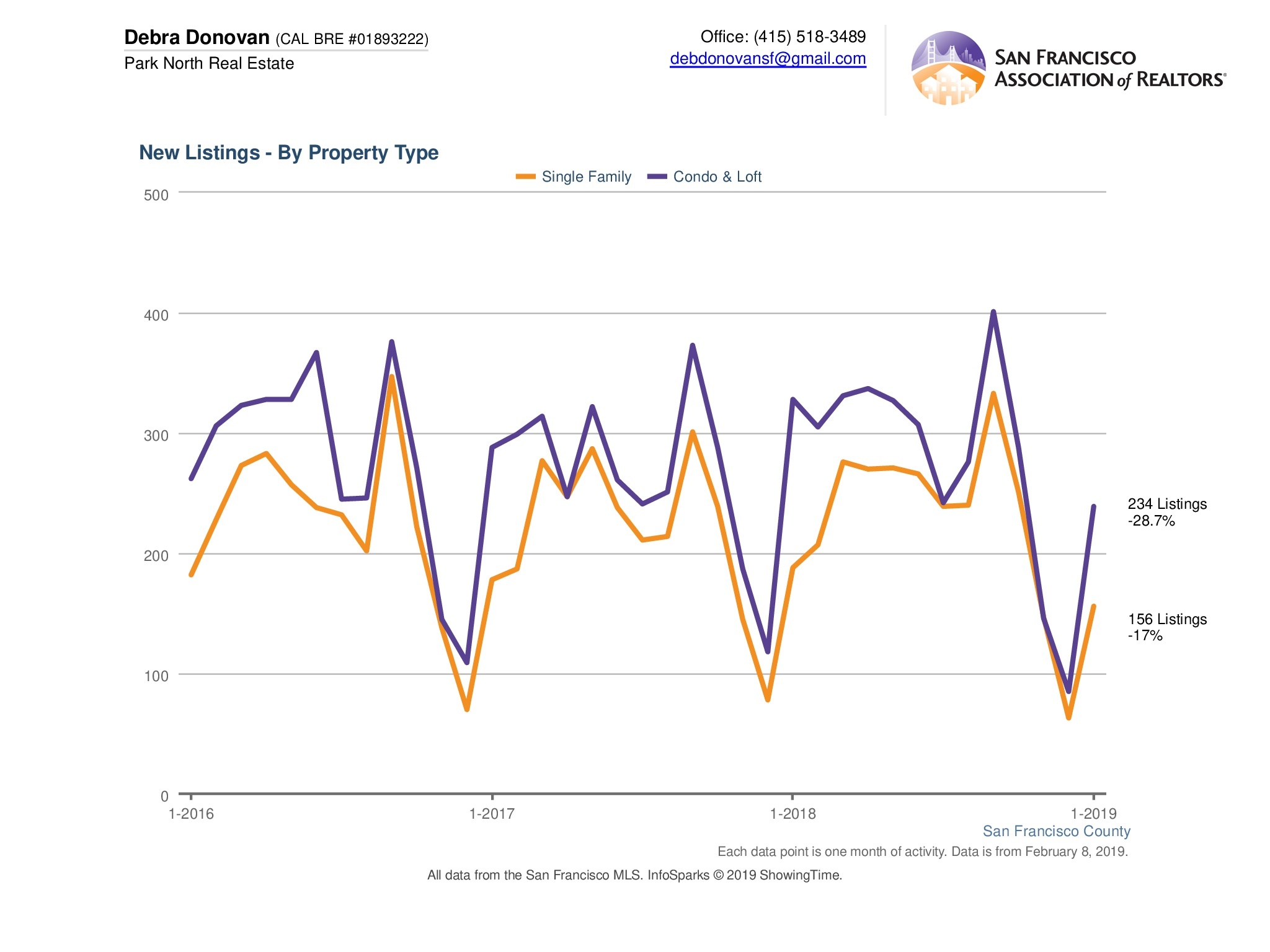 The number of single family homes that sold in January was mostly on par with the previous year. Condos and loft sales, however, were down significantly compared to the previous year. This may have been affected by new construction sales, which typically aren’t listed in the MLS and so don’t show up in these statistics. 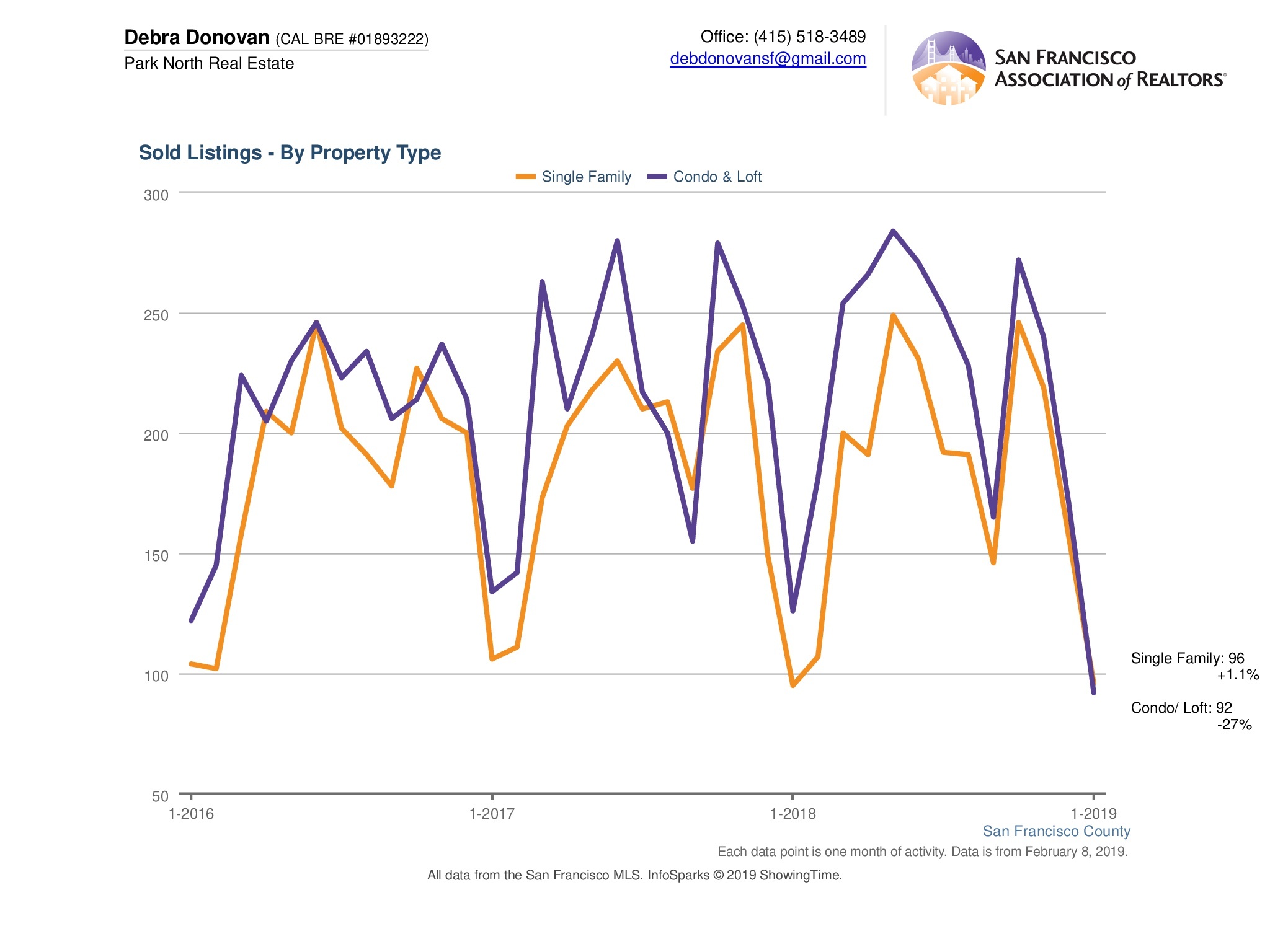 Active listings, the number of listings available for sale at the end of the month, ticked up slightly for single family homes, but were down for condos and lofts. Both were an increase compared to December 2018, again showing properties staying on the market longer. This can also be seen from the Days on Market chart below. 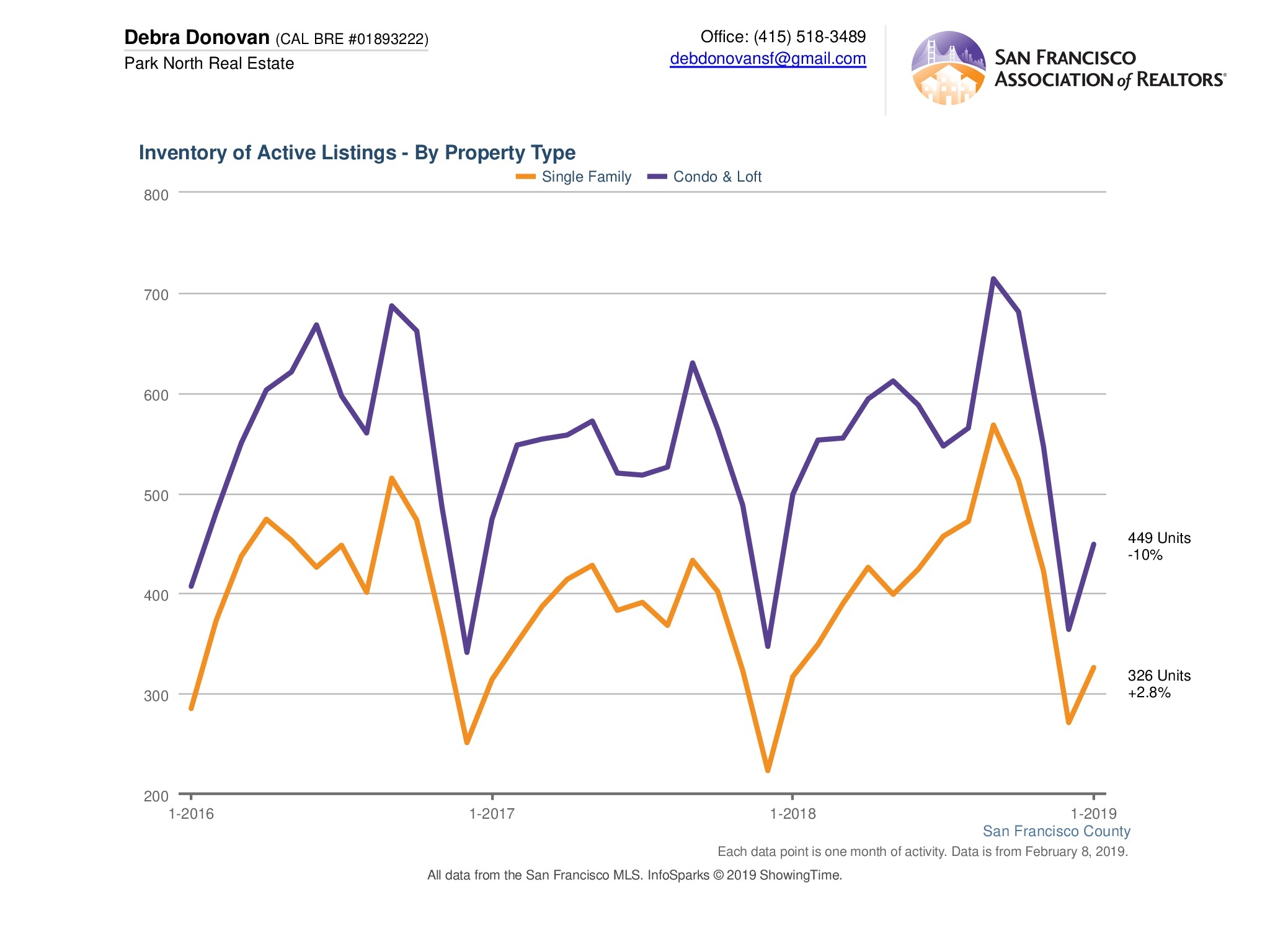 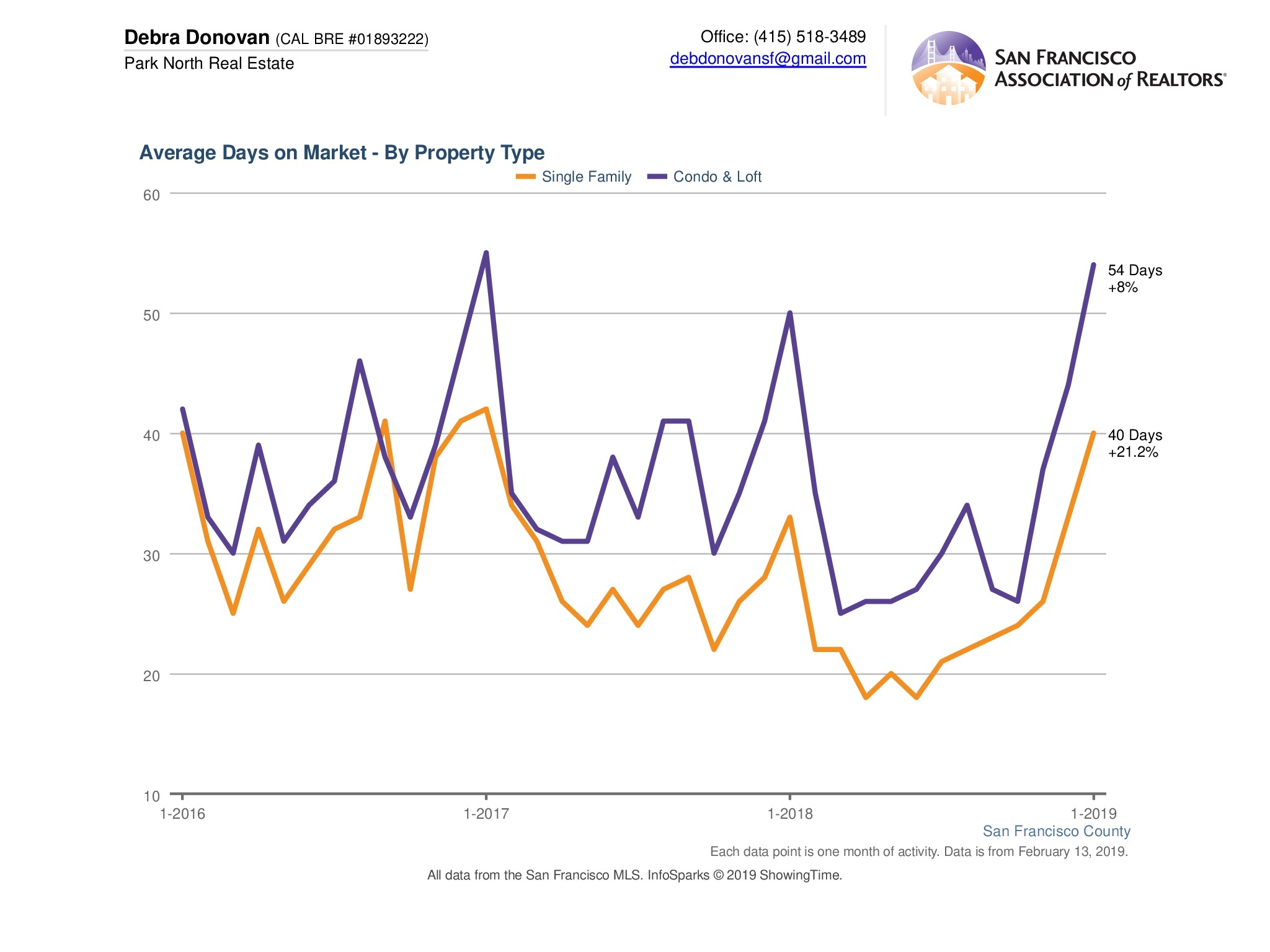 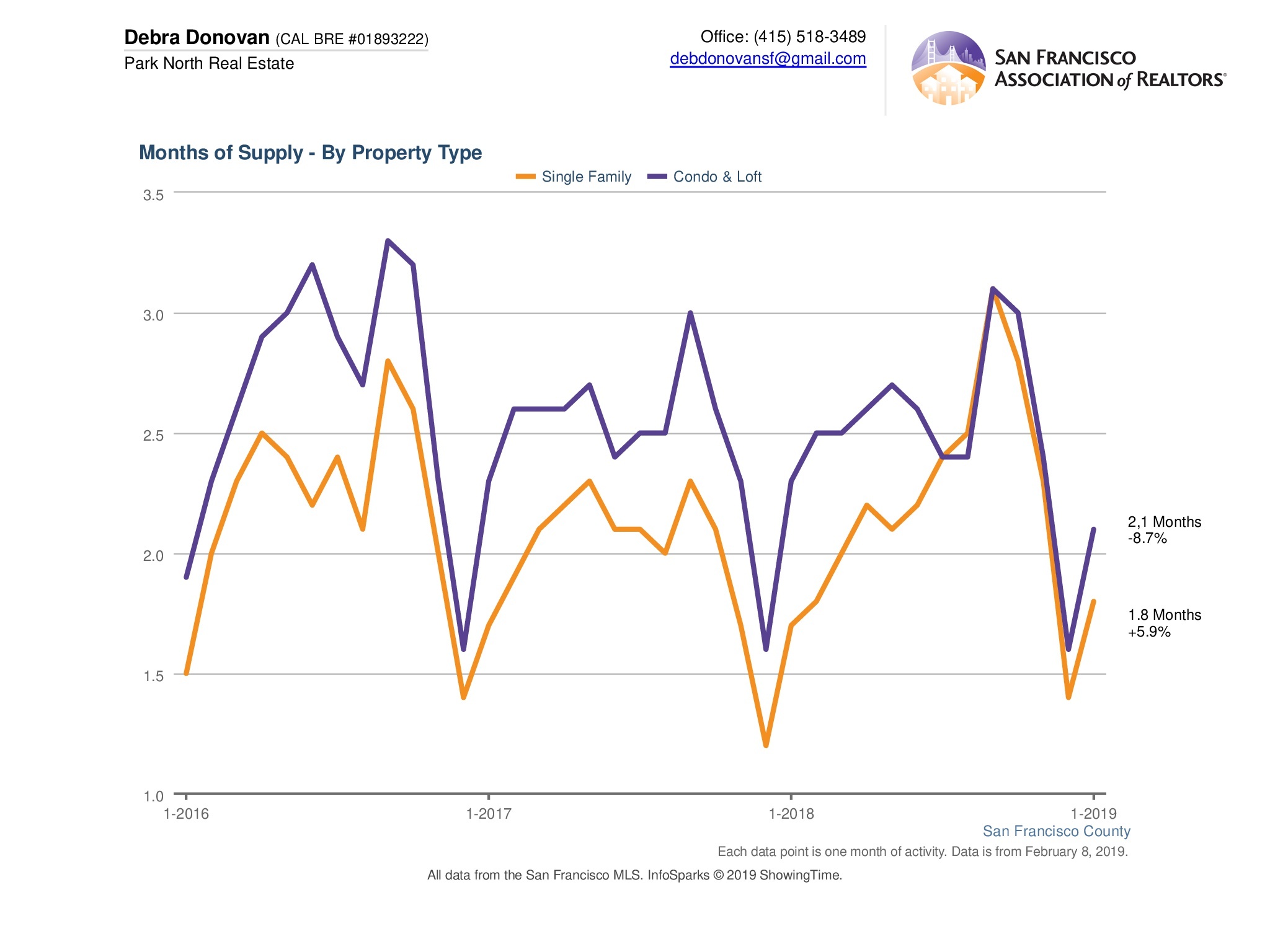