After significant jumps in median sales price earlier this year, particularly for single family homes, the market has mostly remained flat for the 2nd quarter. New and active listings continue to be down double-digits compared to the same month last year as our anemic inventory situation continues. On the other hand, months supply of inventory was at its lowest point since January, particularly for single family homes. The percentage of homes selling for over asking price also jumped. For single family homes it was the highest since September of last year; for condos and lofts since May 2016. See the latest stats, as well as which districts have the lowest cost per square foot in the city below. 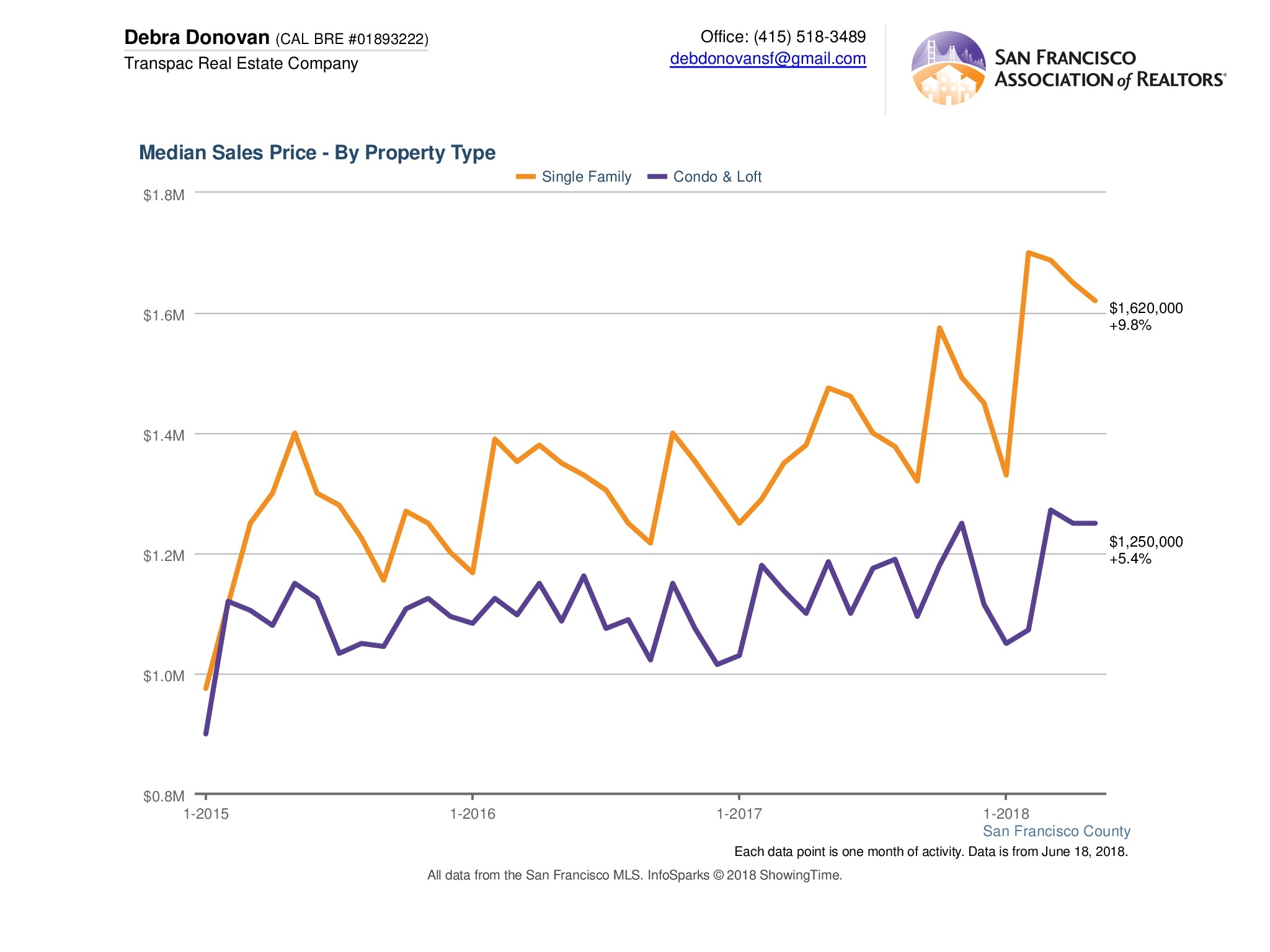 Active listings are the number of properties available for sale in active status at the end of a given month. In May, there were just 324 homes actively for sale by month’s end, down 26% compared to the same month last year. There were just under 500 condo and loft listings available, representing an almost 14% decrease compared to May 2017. 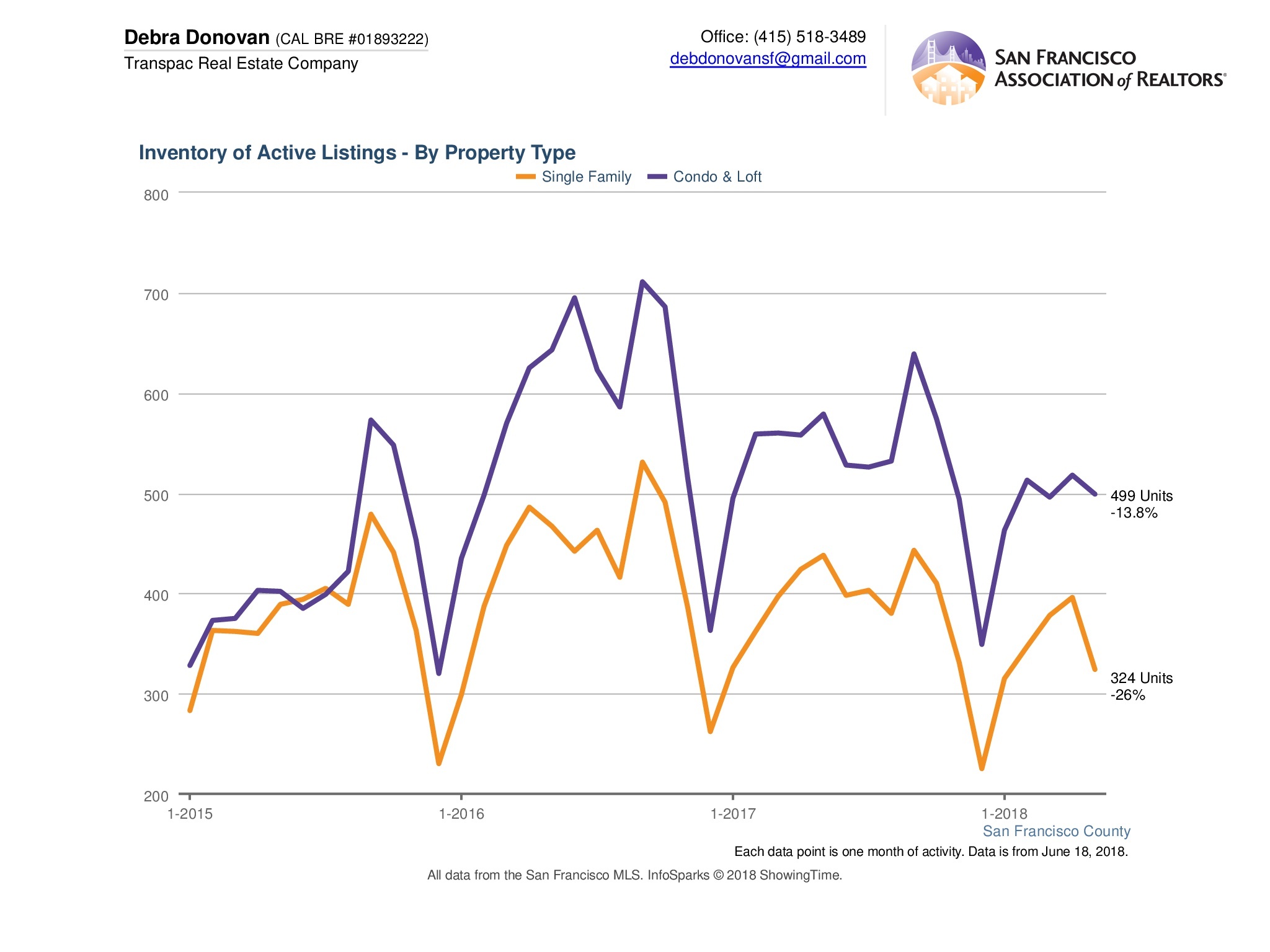 Further proof that demand continues to outstrip supply, almost 85% of single family homes sold for over the asking price in May. This was up over 7% compared to the same time last year, and the highest it’s been since September 2017. About 68% of condos and lofts sold for over their asking price, up more than 12% compared to last year and the highest percentage since May 2016. 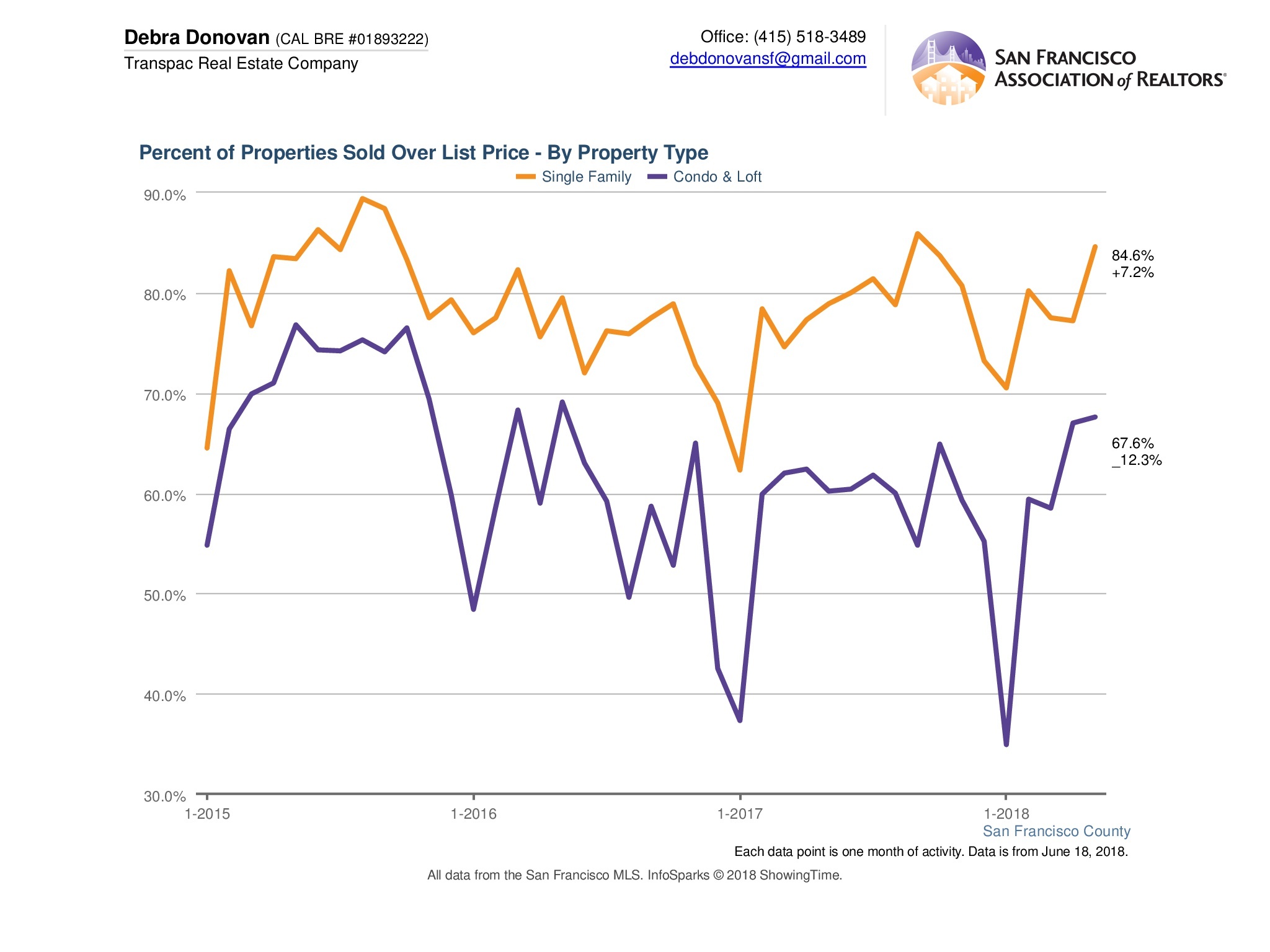 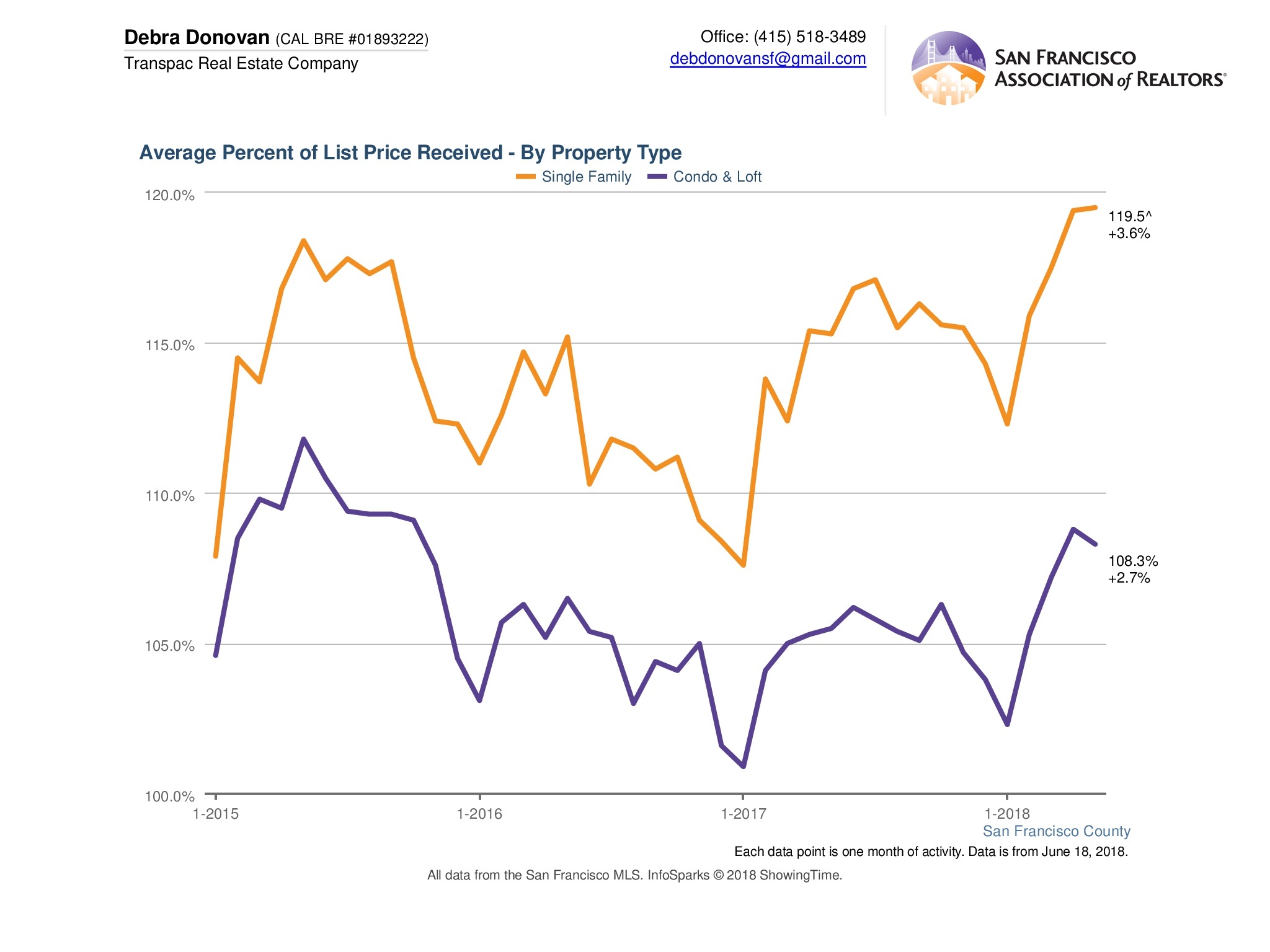 Also called MSI, this is the rate at which homes on the market are being absorbed. For example, if there are 50 homes on the market and 10 homes selling each month, there is a 5 month supply of inventory (wouldn’t that be nice!). Last month, there was a 1.7 month supply of single family homes, down 29% from last year. MSI for condos and lofts was at 2.2 months, down 18.5% compared to last May. A more balanced market would have 4-6 months of inventory, so this is just another indication of our paltry inventory. 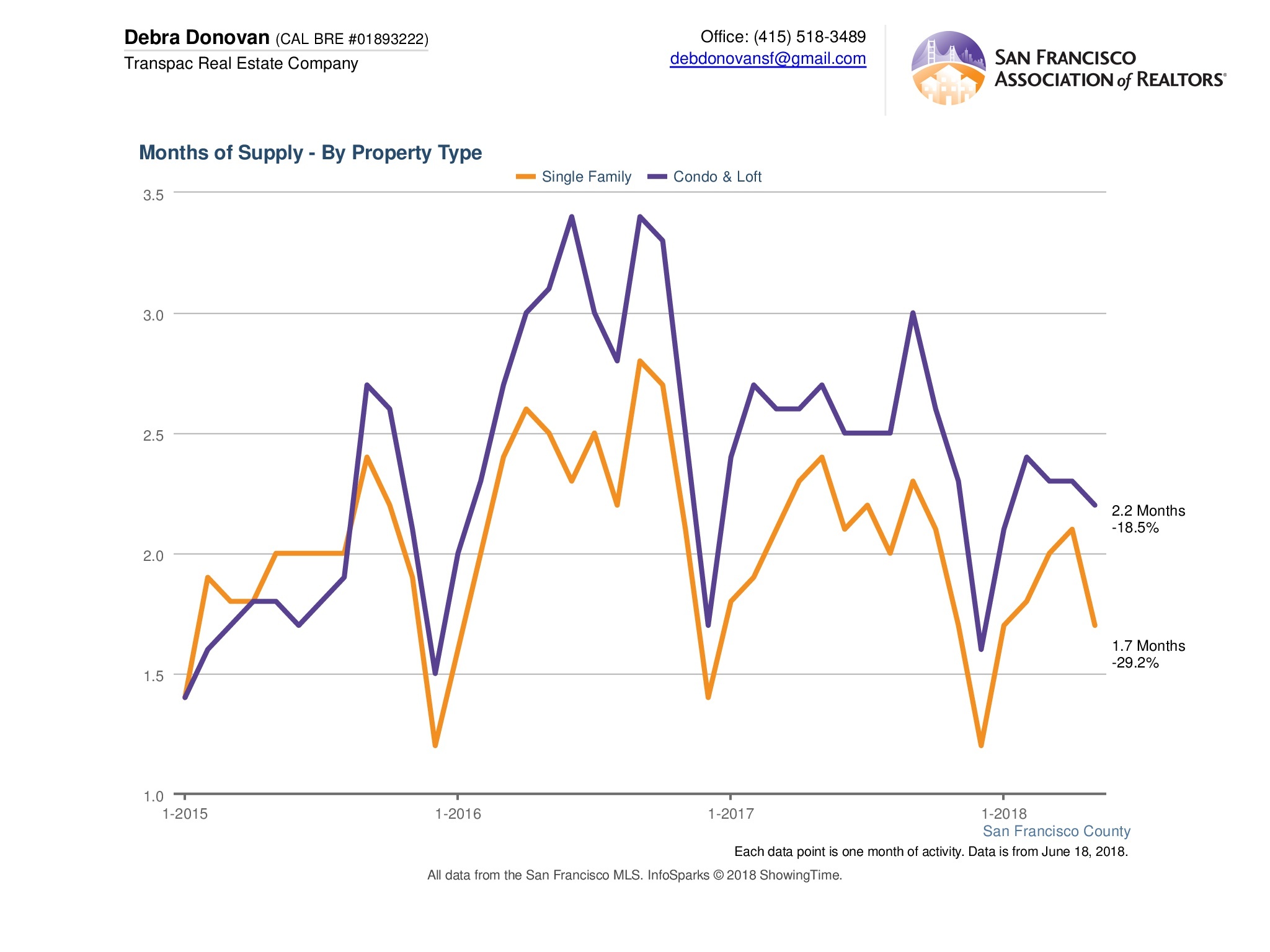 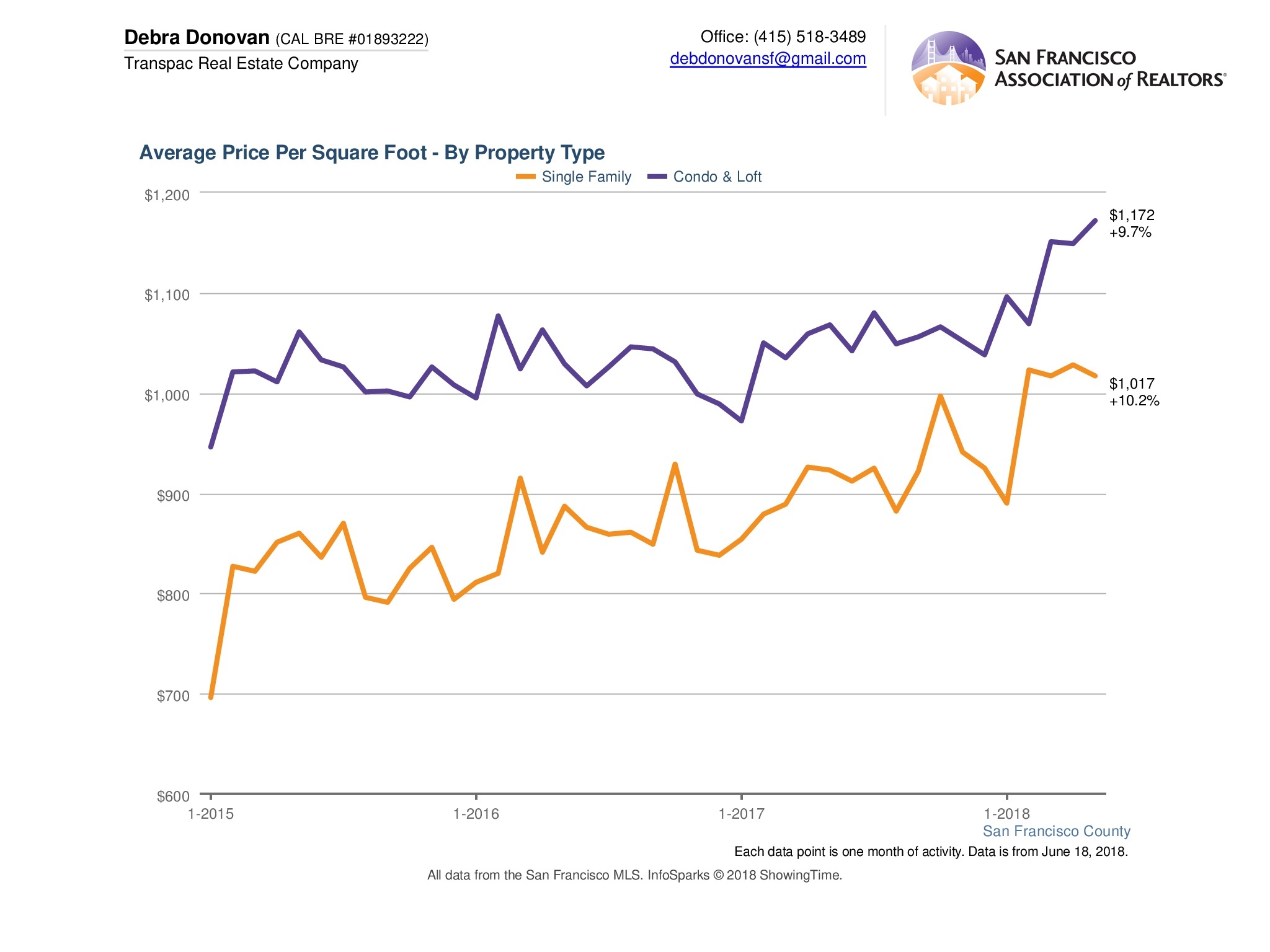 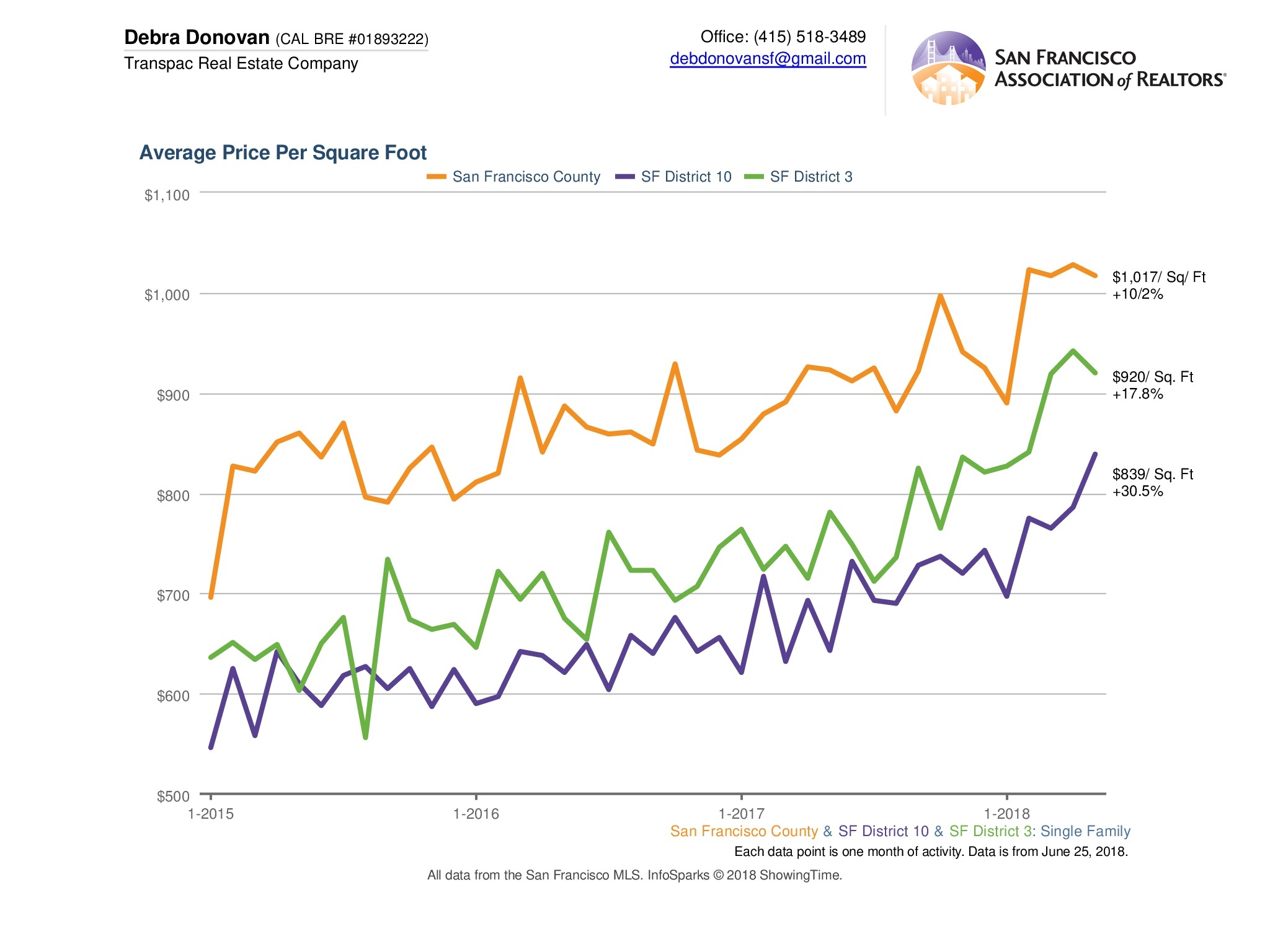 Districts with Lowest Average Cost per Square Foot for Codos and Lofts:

The picture for condos and lofts plays out almost the same as for single family homes. Here, district 4 saw the largest percentage of year-over-year increase in average cost per square foot, rising 30% to $925/ square foot. District 10 saw a 16.3% increase to $733/ square foot. The only slight outlier here was district 3, which increased 3.6% compared to last May to $723/ square foot. But this was actually down compared to May, and down quite a bit compared to February. This district has a combination of older condos as well as higher end and new condos and townhomes. As with all data, one large or small sale can skew the numbers. 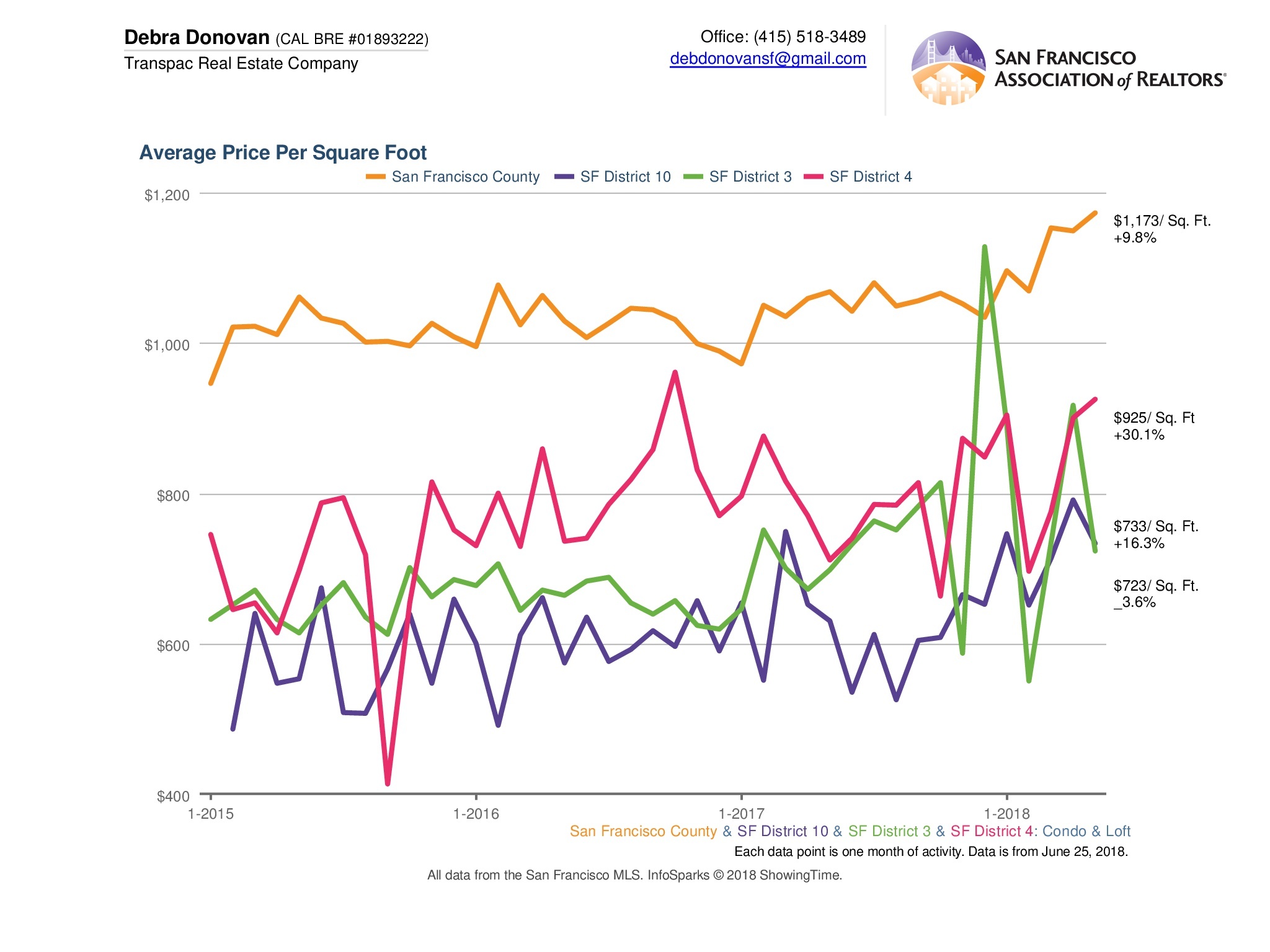 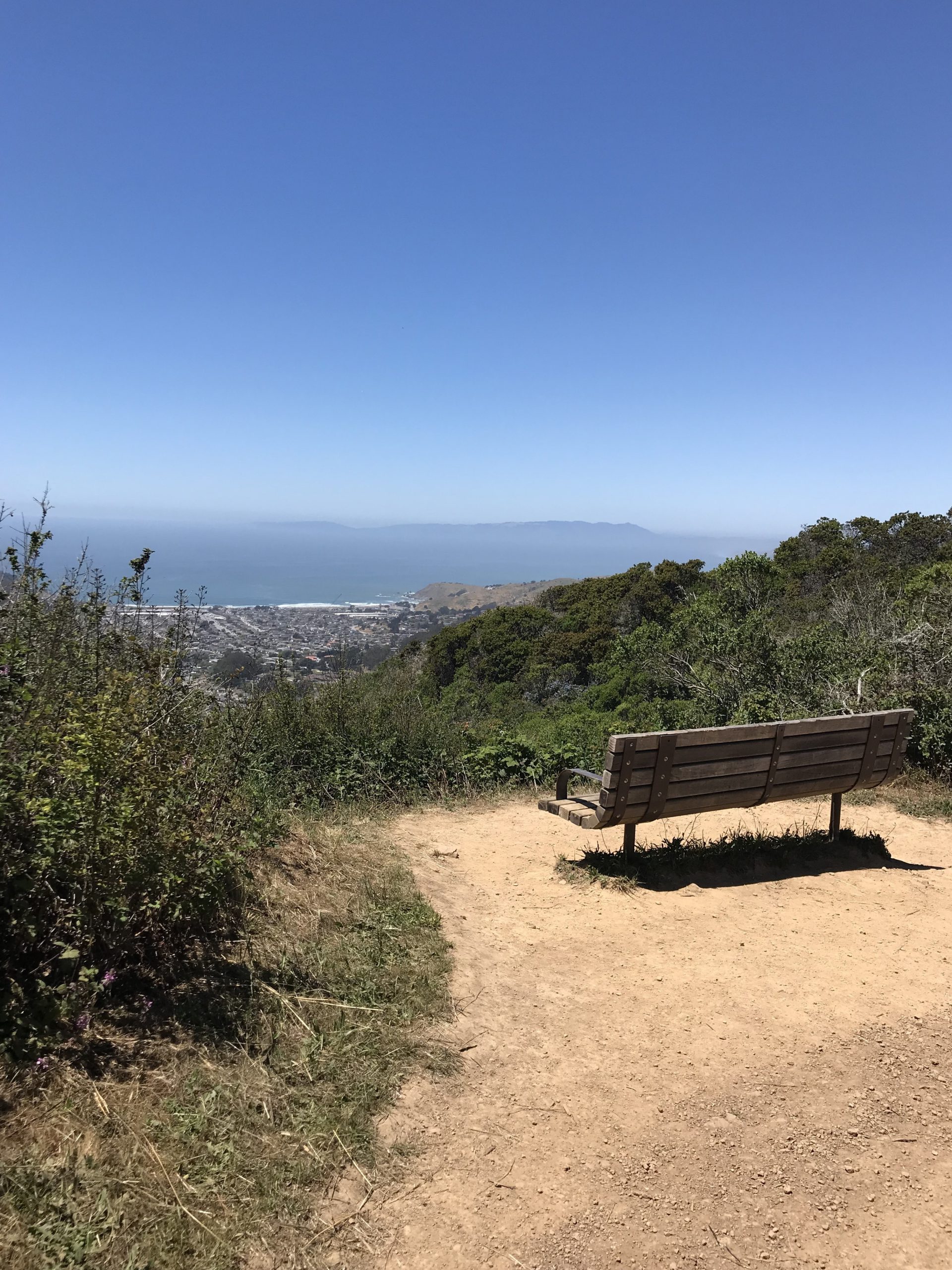 I’ve been spending a lot of time in Pacifica lately with clients who had been looking for, and have now just closed, on a new home there. Everytime I go, I am reminded about how much I love it: the water, the mountains, the community. Driving down Highway 1 as the Pacific Ocean appears suddenly around a curve still makes me tingle.

All of this time there also reminded me of one of my all-time favorite hikes, the Montara Mountain Trail in Linda Mar. The gorgeous weather last weekend inspired me to dust off my hiking shoes and hit the trail again.

While I’m told there are other points of entry to get to the trail, I park at the San Pedro Valley Park entrance off of Oddstad Blvd. There’s plenty of parking, a restroom, picnic tables, and barbeques that are great for a pre- or post-hike cookout. 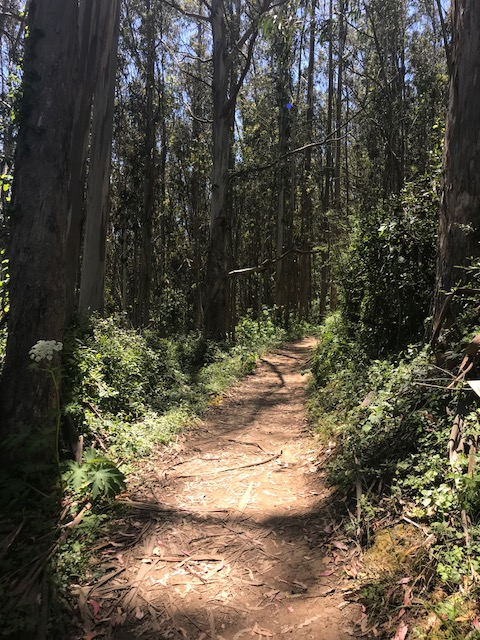 The trail itself is a series of switchbacks of varying lengths and elevations that wind along the mountain. At first, the trail takes you through a forest of mostly eucalyptus trees that provide you with a good amount of shade (and that eucaplytus aroma). The further you go up there’s less shade but the views get more and more spectacular! As you ascend, the Pacific Ocean greets you on one side of the trail, while the gorgeous, lush green canyons of the mountain are on your other side. Soon the eucalyptus trees give way to sturdier trees shrubs and flowers. On a foggy day, it can be quite windy up there but the manzanita trees survive just fine. At certain points on the trail you are surrounded by them.  Occasionally, you’ll see a rabbit scamper across the trail. And you will definitely spot scat (animal droppings), though I’ve never had an encounter with any other wild animal up there. 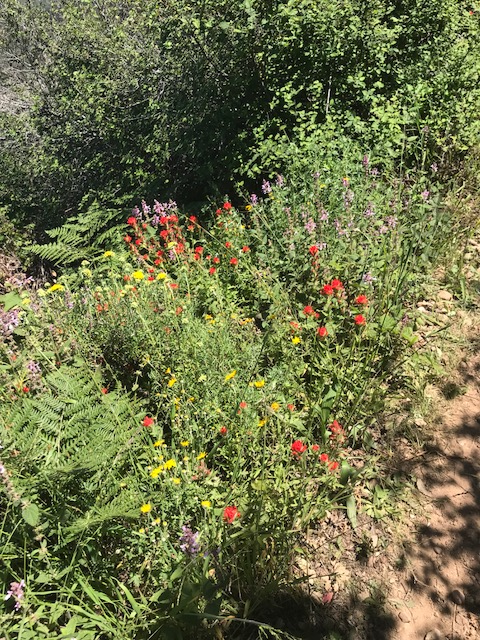 The trail is incredibly well maintained, and there’s a park bench (like in the photo above) about every 3/4 miles or so if you want to take a rest. Some are worth stopping at just for the views. It’s usually not very crowded, but you will pass other hikers on your ascent or decent. Personally I find this comforting as a solo hiker. I don’t feel completely alone up there, while I also get that feeling of solitude that draws me to hiking on my own.

While the trail is mostly wide, there are places where it narrows. The Parks Department does a great job of keeping a very clear trail path, installing steps in some places where you have to hike over large bolders, and excellent signage. As you get closer to the summit there are large rocks and bolders. 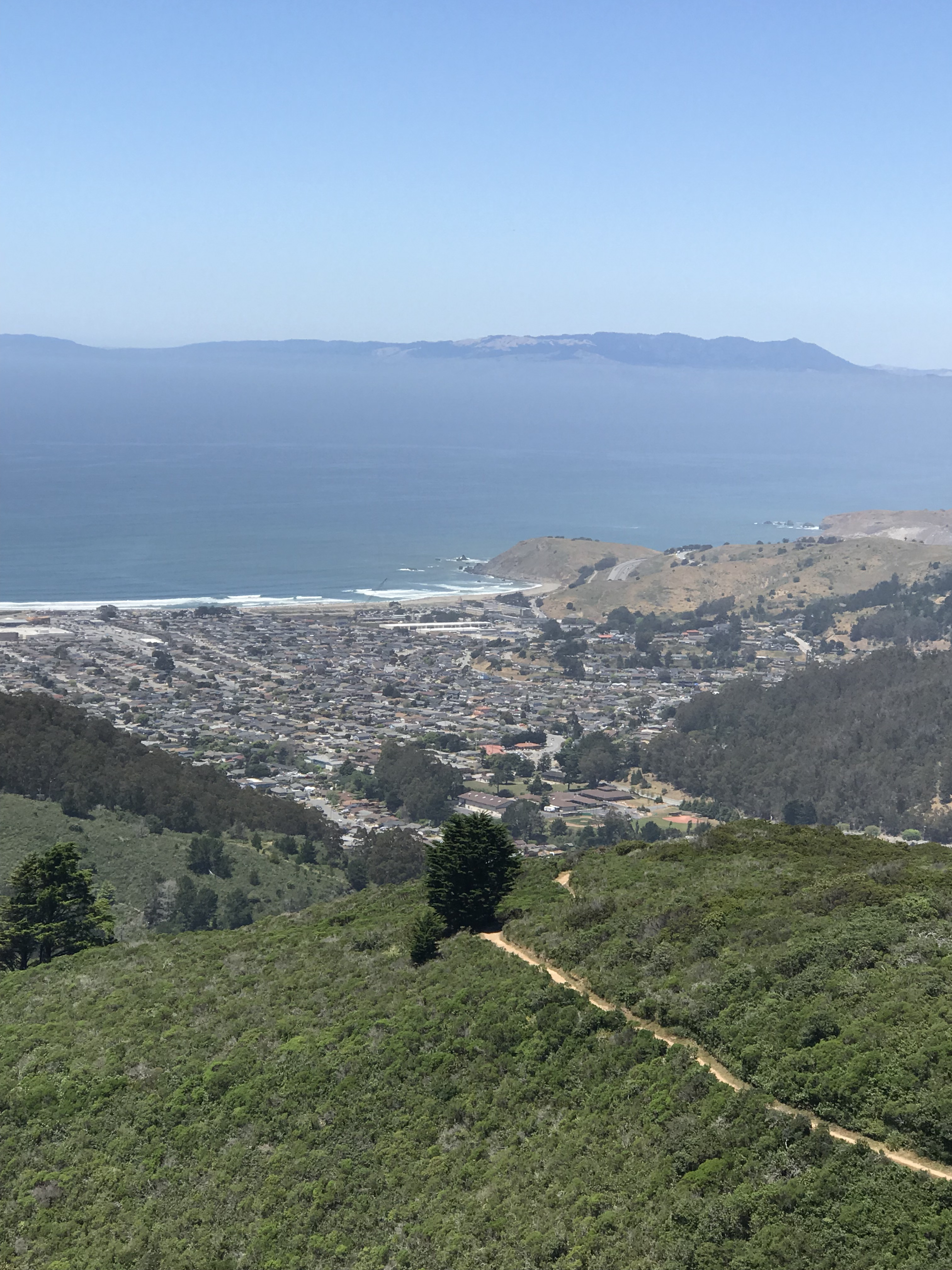 It’s about a 2 1/2 mile trek to the top of the trail, but you can either continue up the access road, where you’ll reach some communication towers about a mile later. Or you can continue on to Montara beach, making the hike about 7 miles. So far I’ve only hiked up to the communication towers, but perhaps one day will attempt to make it all the way to the beach.

San Pedro Valley Park is a great option if you’re looknig for a day-cation from the City but don’t want to go too far. If a 5+ mile hike is not your thing, then consider the Brooks Creek Trail, also accessible from here. Only one mile and a much flatter walk, it leads to some beautiful waterfalls. Or just grab a picnic table or lay out your blanket and enjoy a day of sunsine and rest.

When I’m not off hiking the trails of the Bay Area you can find me helping my clients buy or sell their homes. If you are considering buying or selling a home, give me a call!