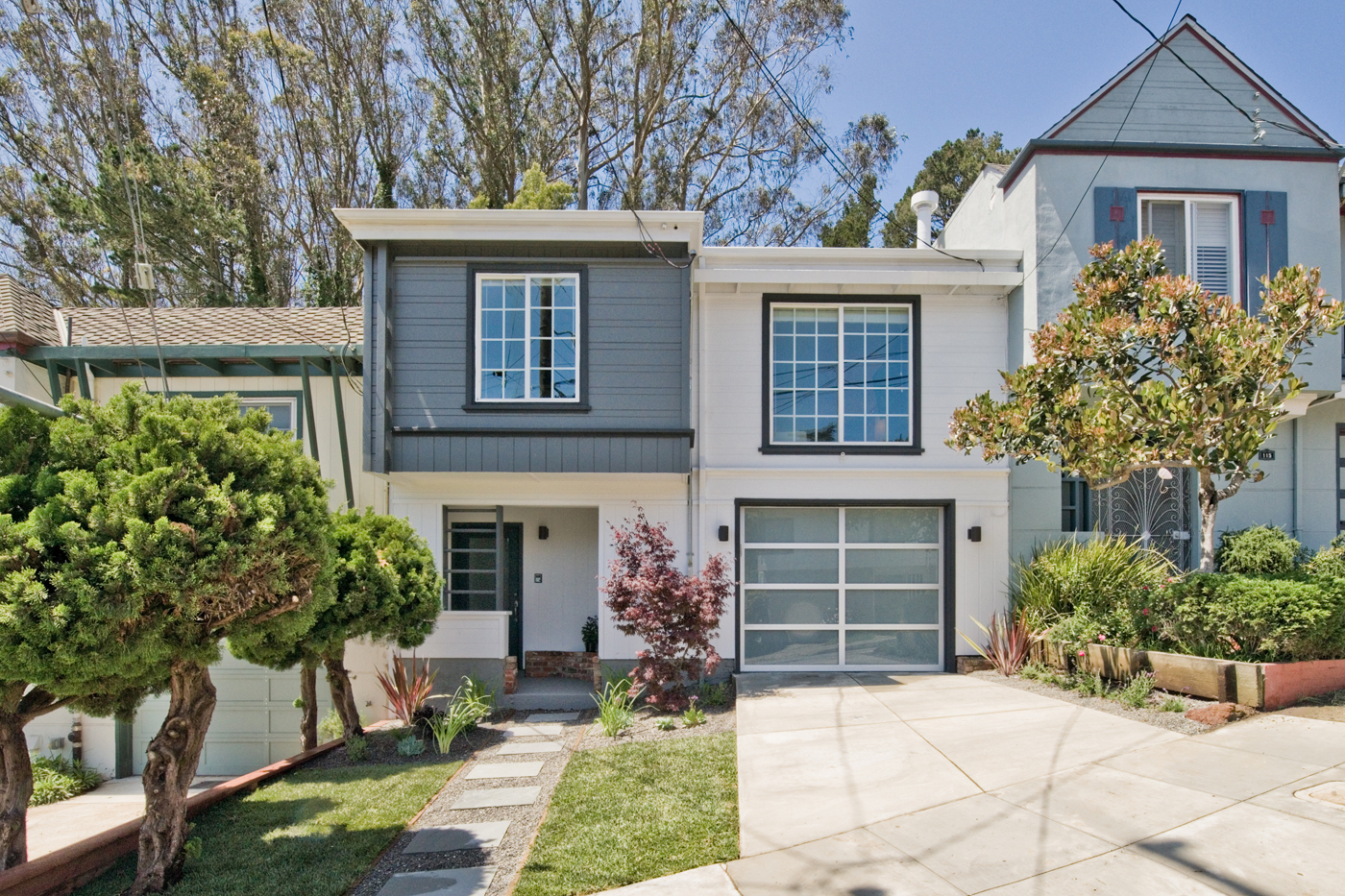 Nestled along the western slope of Twin Peaks is Midtown Terrace, an enclave of single family homes built in the 1950’s. The Midtown Terrace Homeowner’s Association, consisting of about 800 single family homes, was created in 1957. The neighborhood features mid-century homes arranged in rows on terraced streets that take advantage of the beautiful views, and is surrounded by greenbelts, forests, reservoirs, and open space. As one of only a few “planned communities” in San Francisco, there are no shops, businesses, or commercial streets. However, these are easily accessible in nearby Mira Loma, West Portal, and Diamond Heights.

Midtown Terrace is a wonderful place to call home for families, couples and professionals. In addition to many hiking trails, it has a recently updated playground as well as neighborhood events organized by the Homeowner’s Association. The neighborhood abuts the renowned lookout vista called Christmas Tree Point, which offers an almost panoramic view of the City.

Midtown Terrace is perfect for those looking for a family-friendly environment, natural landscape and a quiet nightlife.  Due to its central proximity, Midtown Terrace offers easy access to freeways for commuters and it’s a short drive to the Castro, Noe Valley, Glen Park and West Portal neighborhoods. There are several excellent public, private and parochial schools nearby.

It’s great to be home after a nice vacation in hot, humid New York. I’m not sure I’ve ever missed our cool, foggy summer so much!

We’re now deep into the summer selling months, which in San Francisco is typically light on inventory, and this year is certainly not deviating from that history. This year seems even more anemic than years past and in fact, looking back through the past 10 years I couldn’t find another July with less new inventory or even overall active inventory on the market. 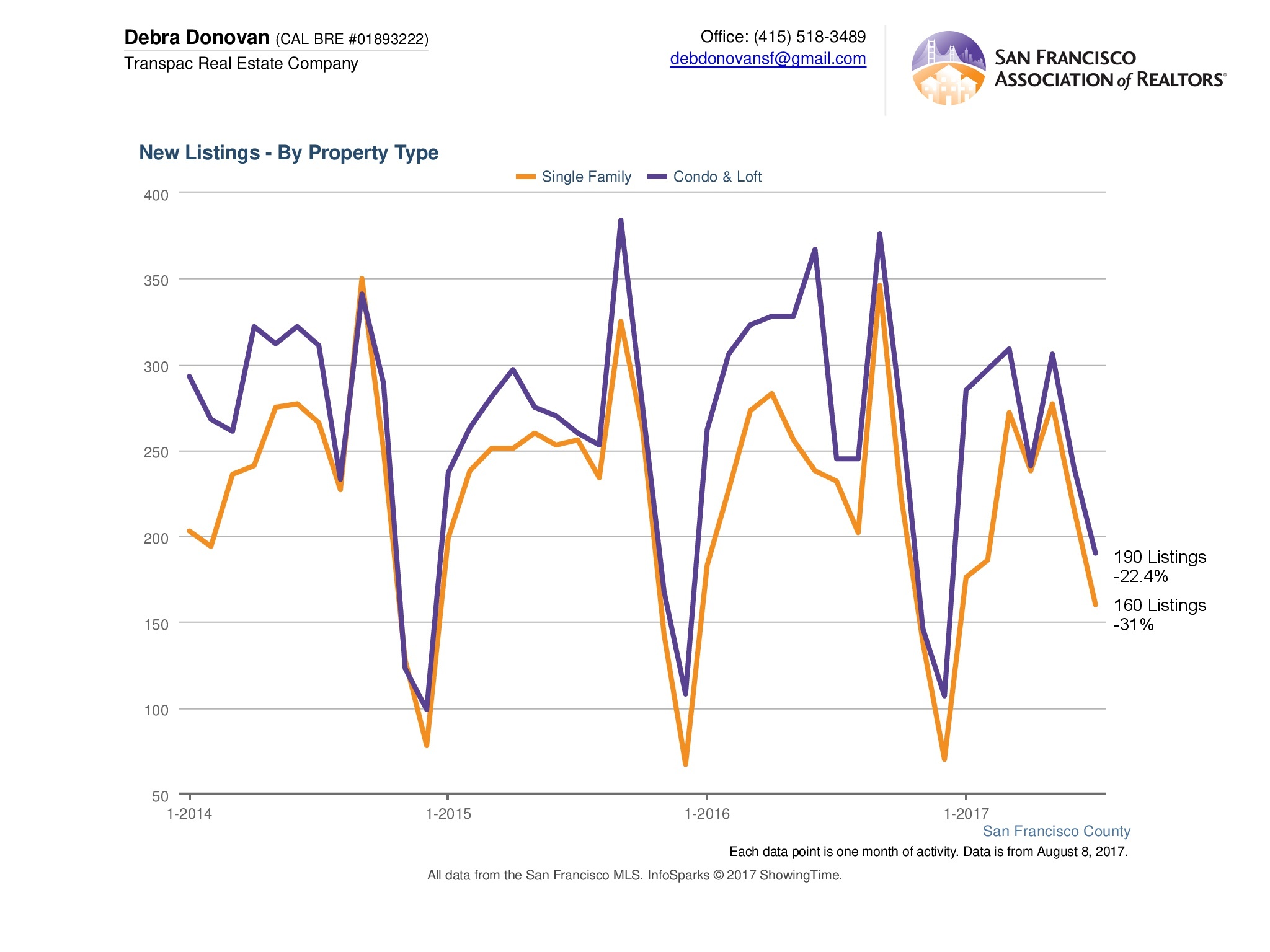 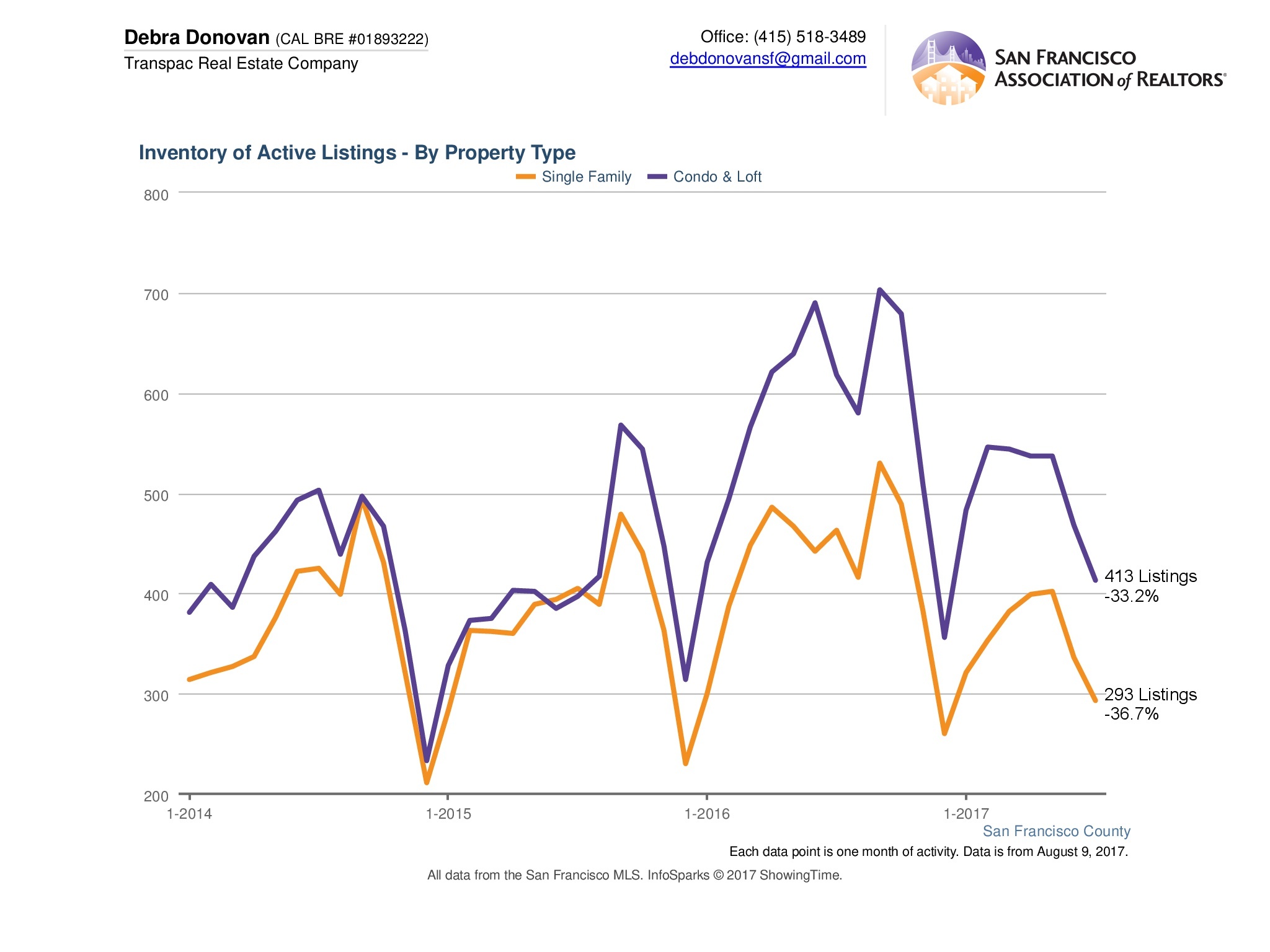 So where are all of the sellers??

One reason there are fewer sellers is that homeowners are staying in their homes longer. According to a recent KCM blog article I was reading, up until 2008 the average homeowner stayed in their home on average 6 years before selling. After the market collapse and through today, that has now increased to 9 years. The author goes on to give the reasons for this, and I agree with every one. But I would also add a couple of other factors, which may be more specific to the San Francisco real estate market: First, with inventory so low, potential sellers can’t find a replacement home. Whether it’s a young family wanting to upsize or empty nesters wanting to downsize, there is not much on the market to compete for. In addition, home prices have increased so steadily that even if there is a home to compete for, affordability becomes a factor. Yes, your $1 million condo may have increased 8-10% in equity over the past couple of years, but has the $2 million single family home you would like to purchase. It’s simple math.

So Where Is The Inventory?

If you’re in the market to buy, take heart. July and August traditionally have lower inventory levels. Inventory should pick up in the Fall.

While the chart lines are not showing this properly for some reason, median home prices inched up slightly in July compared to June. They were also up when compared to July of last year. 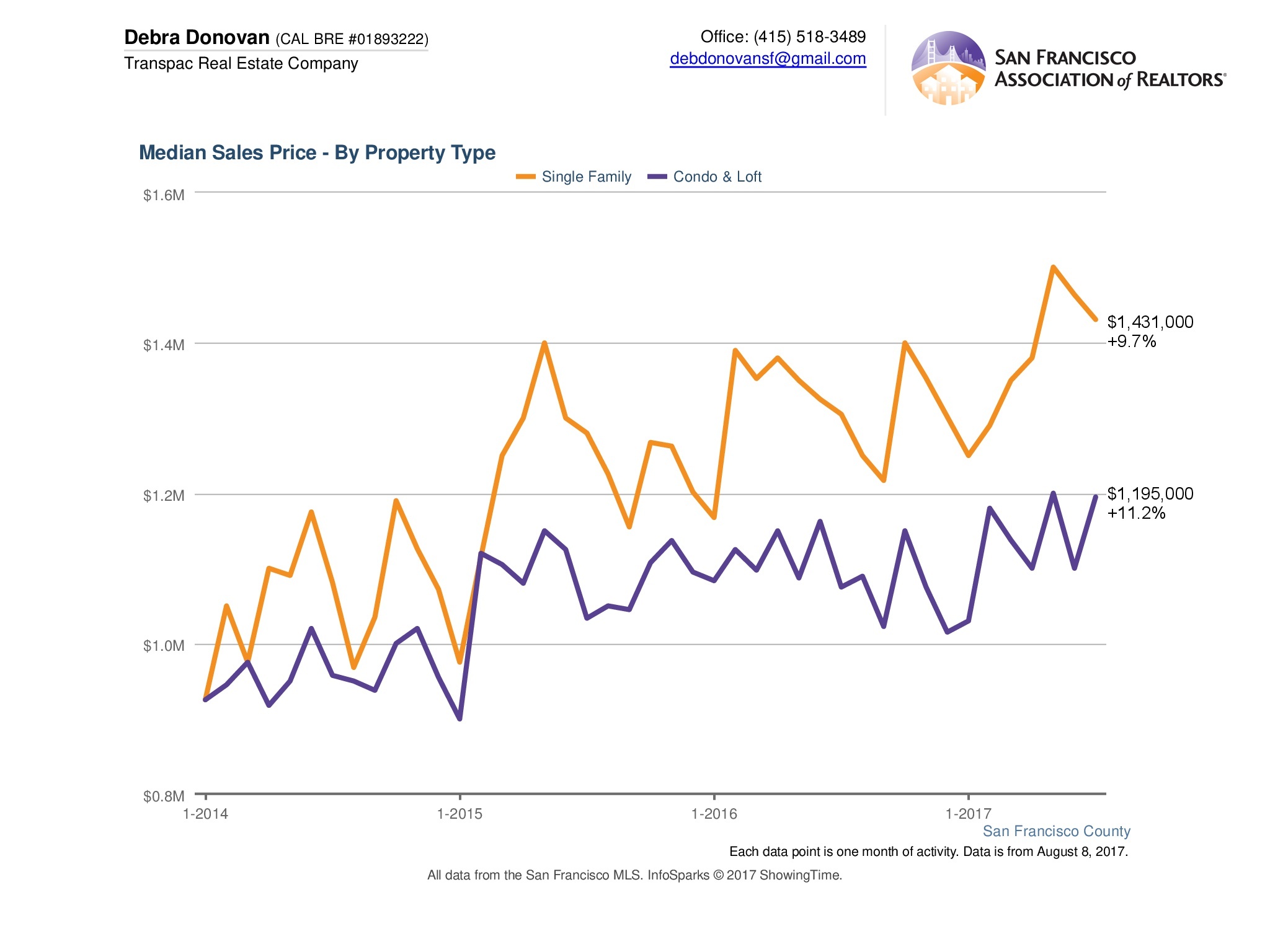 The majority of homes sold are selling for over the property’s list price. About 80% of single family homes and 64% of condo/ lofts sold for over list price in July. 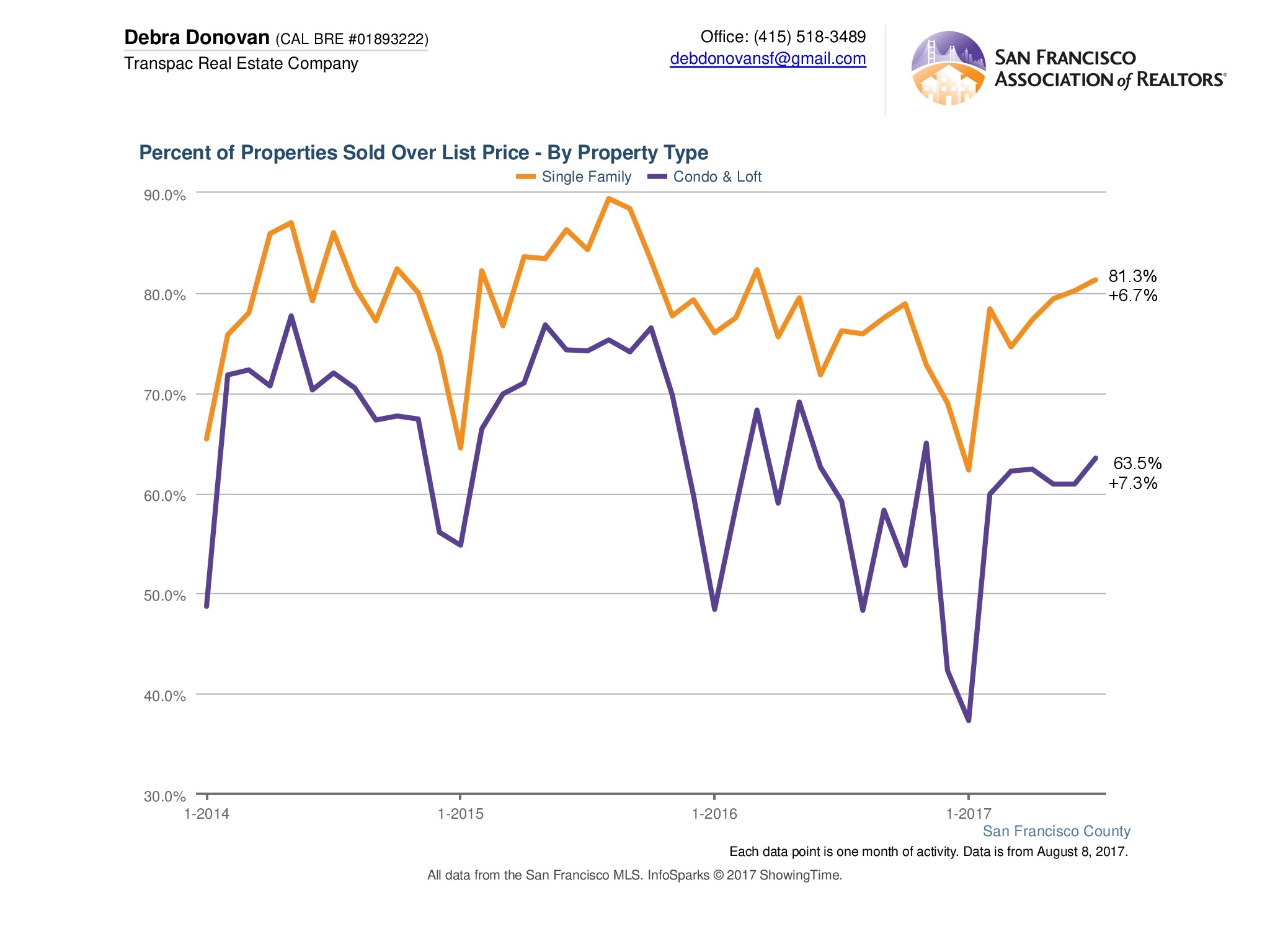 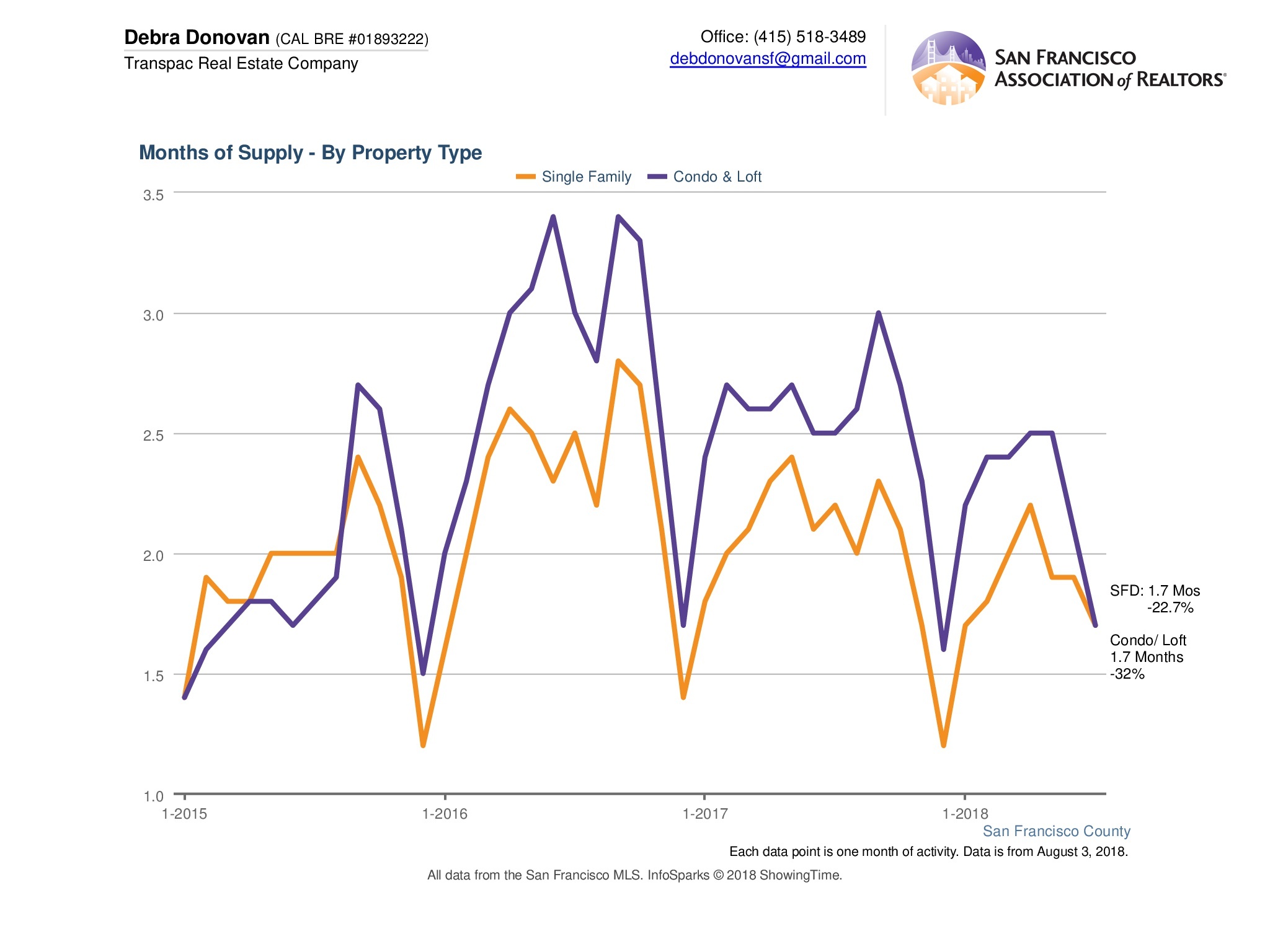 The Real Estate Trifecta and Where to Find the Homes in SF with the Highest and Lowest Cost per Square Foot. 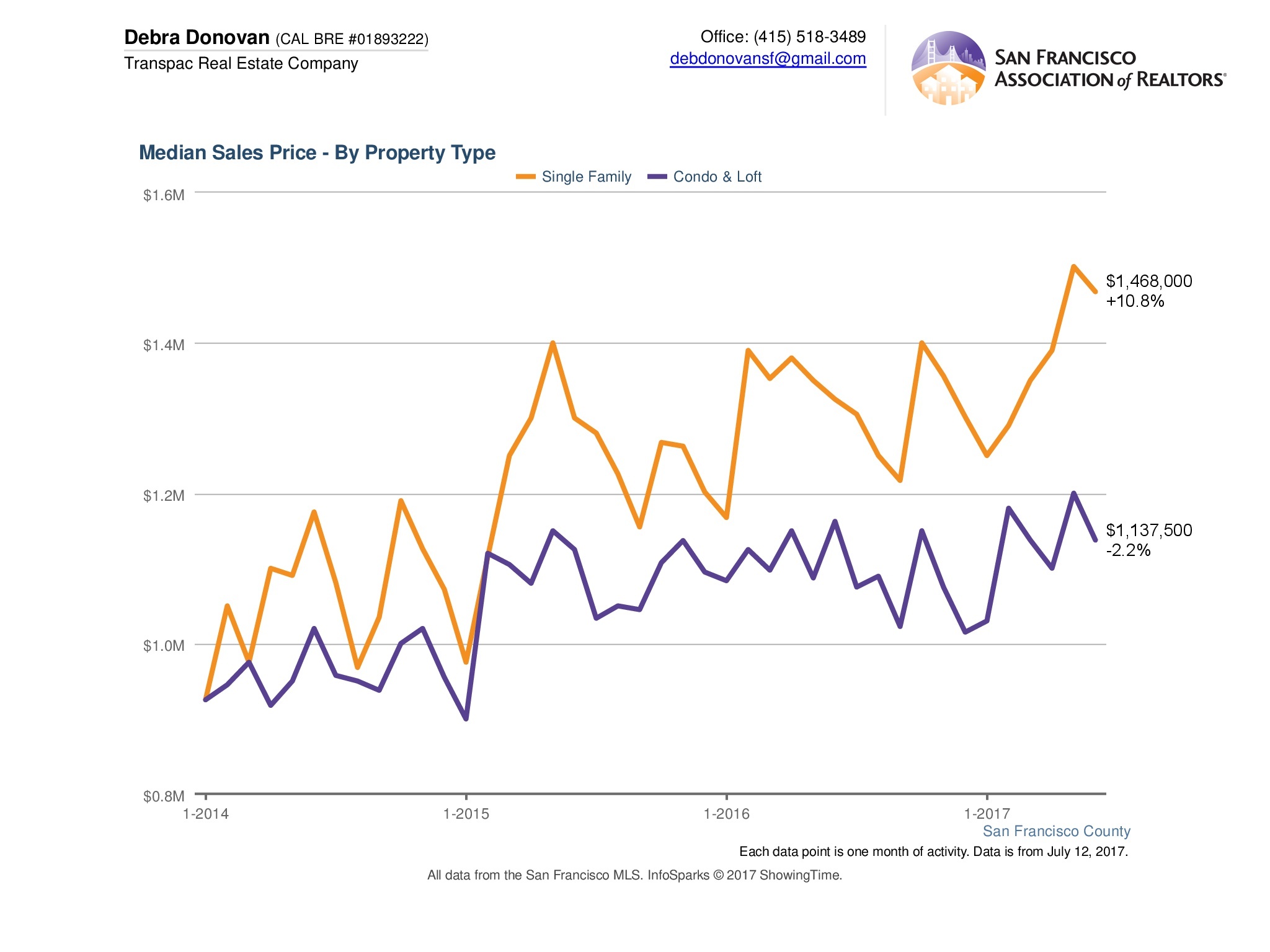 MSI was also down to January levels with only 1.7 months worth of inventory for single family homes, and only 2.1 months for condos/ lofts. Inventory continues to be very tight. Less than 200 single family homes came on the market in June, down 16% from a year ago; only 215 condos, down a whopping 41% compared to June 2016 came onto market. (Note: typically new construction condo sales are not included in this data). 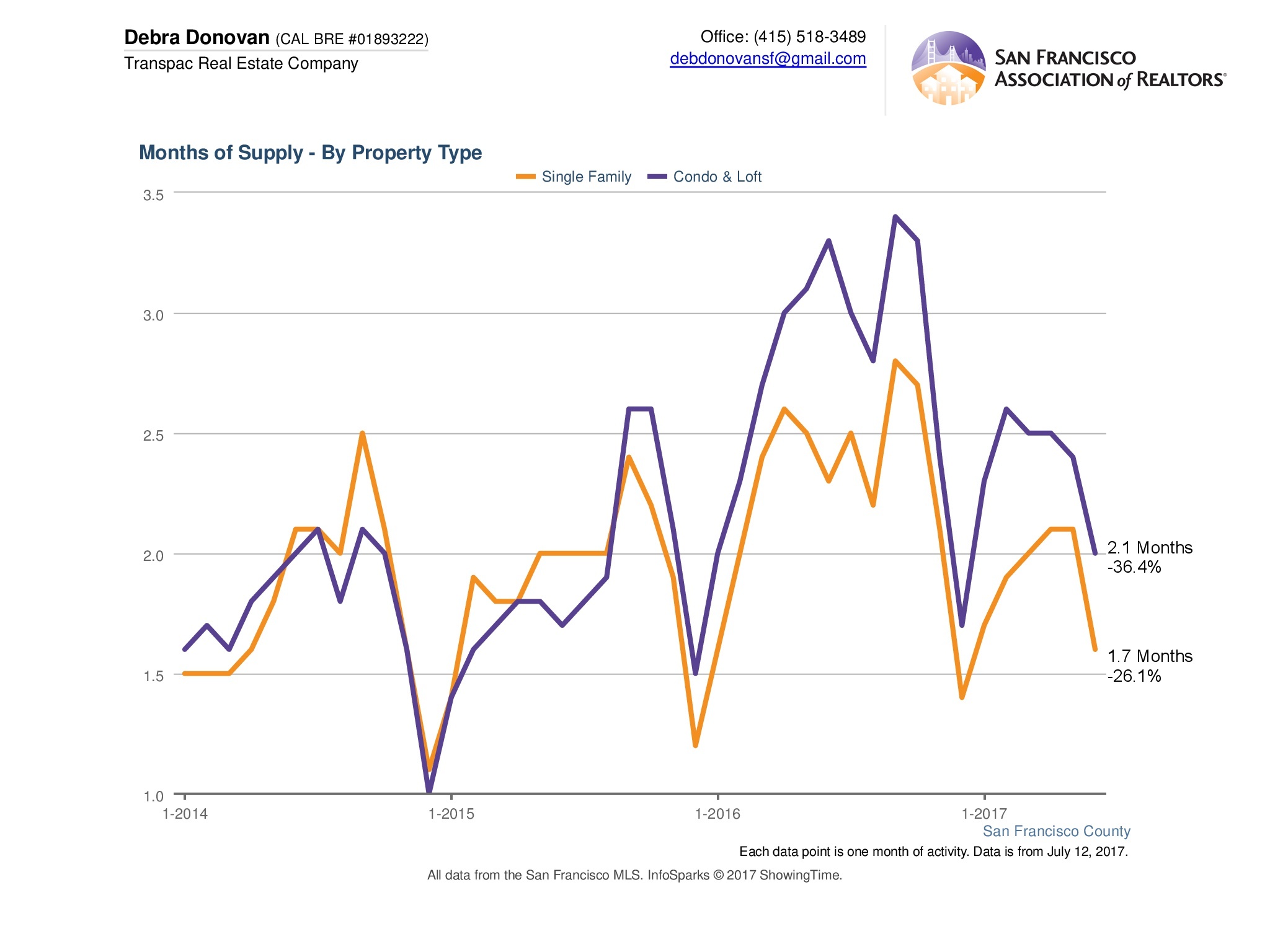 For single family homes, the north side of the city rules. Perhaps not surprisingly, District 7, which encompasses tony Pacific Heights, the Marina, Cow Hollow and Precidio Heights has the highest cost per square foot at almost $1,400/ sq. ft. District 8, which includes neighborhoods like Russian Hill, Nob Hill, North Beach and Downtown, comes in at $1,205 for the month of June, followed by District 6 with neighborhoods like Hayes Valley, NoPA and Lower Pacific Heights at $1,158 per square foot. All come in well above the City-wide average of $906/ sq. ft. 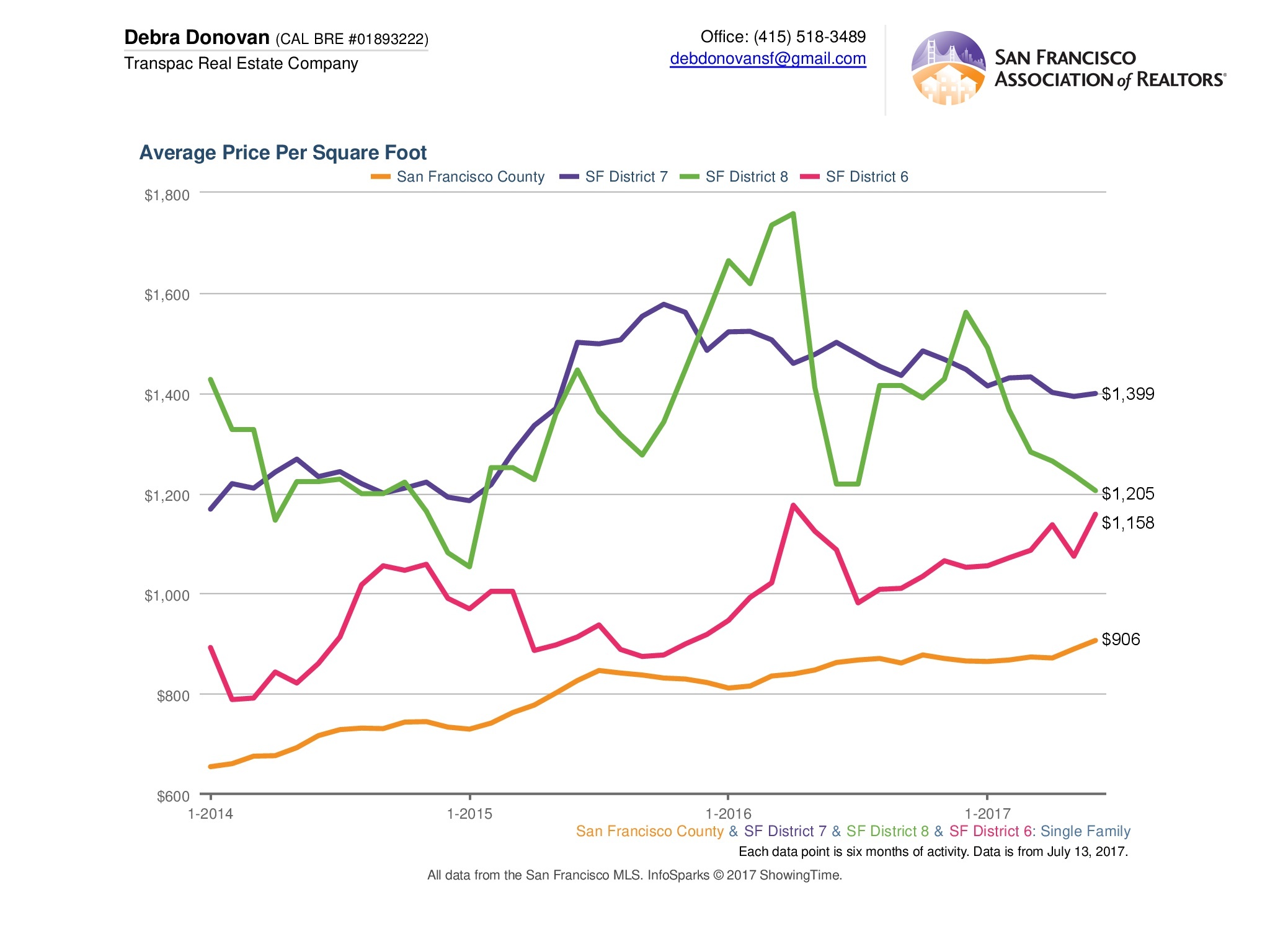 At the other end of the spectrum for single family homes are District 2, which includes mostly the Sunset (inner, central and outer) as well as Golden Gate Heights,which in June clocked in at $887/ sq. ft. Homes in District 3, covering Oceanview, Stonestown, Ingleside and Ingleside and Merced Heights cost an average of $756/ sq. ft. The most southerly area, District 10 with neighborhoods like Bayview, Crocker Amazon, Portola and Excelsior came in with the lowest price per square foot in June, $677/ sq. ft. 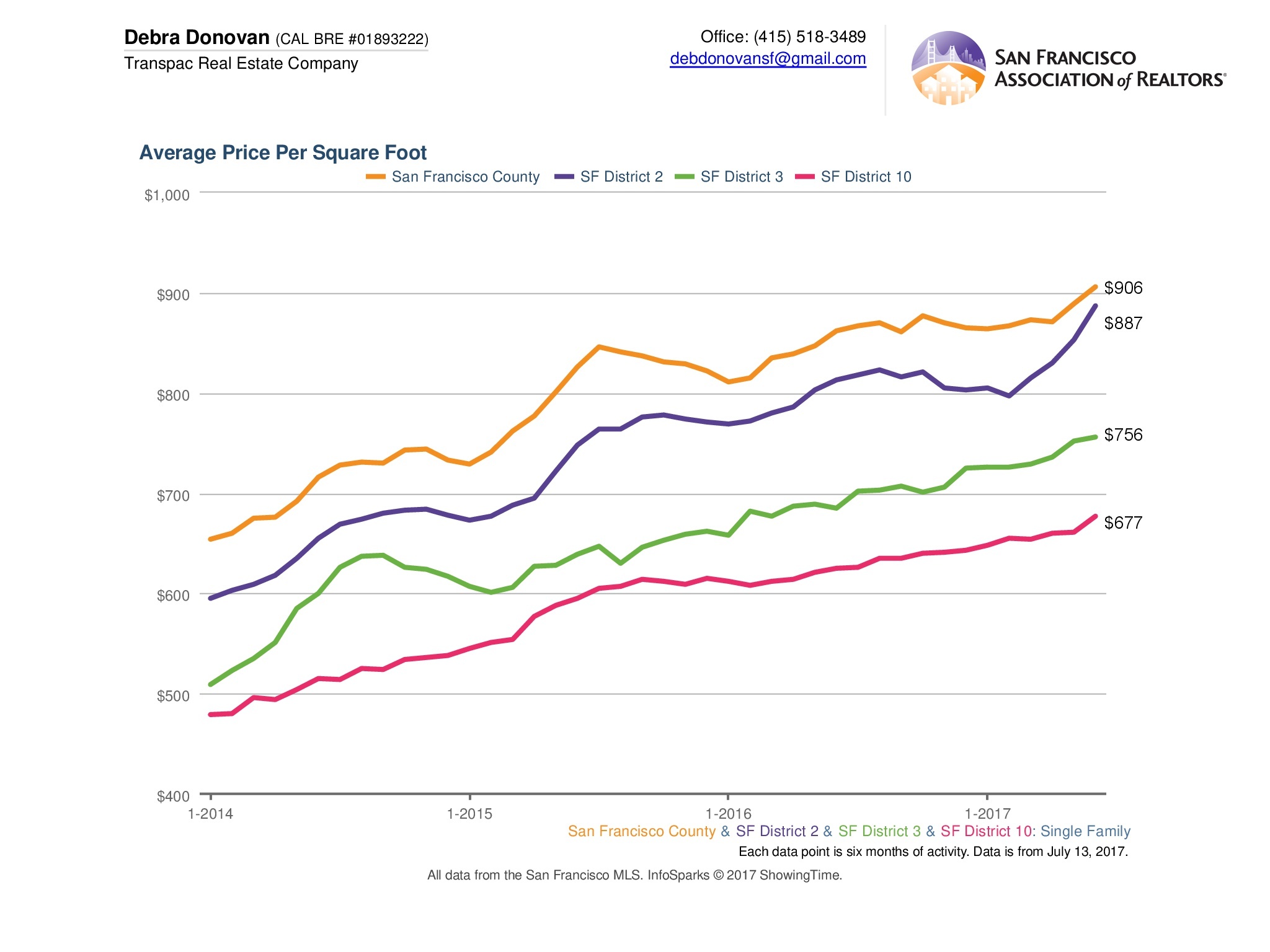 For condos/ lofts, Districts 7 and 8 mirrored single family homes with the highest average cost per square foot in June, with $1,202 and $1,117 respectively. District 5, which encompasses Noe Valley, Haight Ashbury, Cole Valley and Eureka Valley came in third with $1,061/ sq. ft. 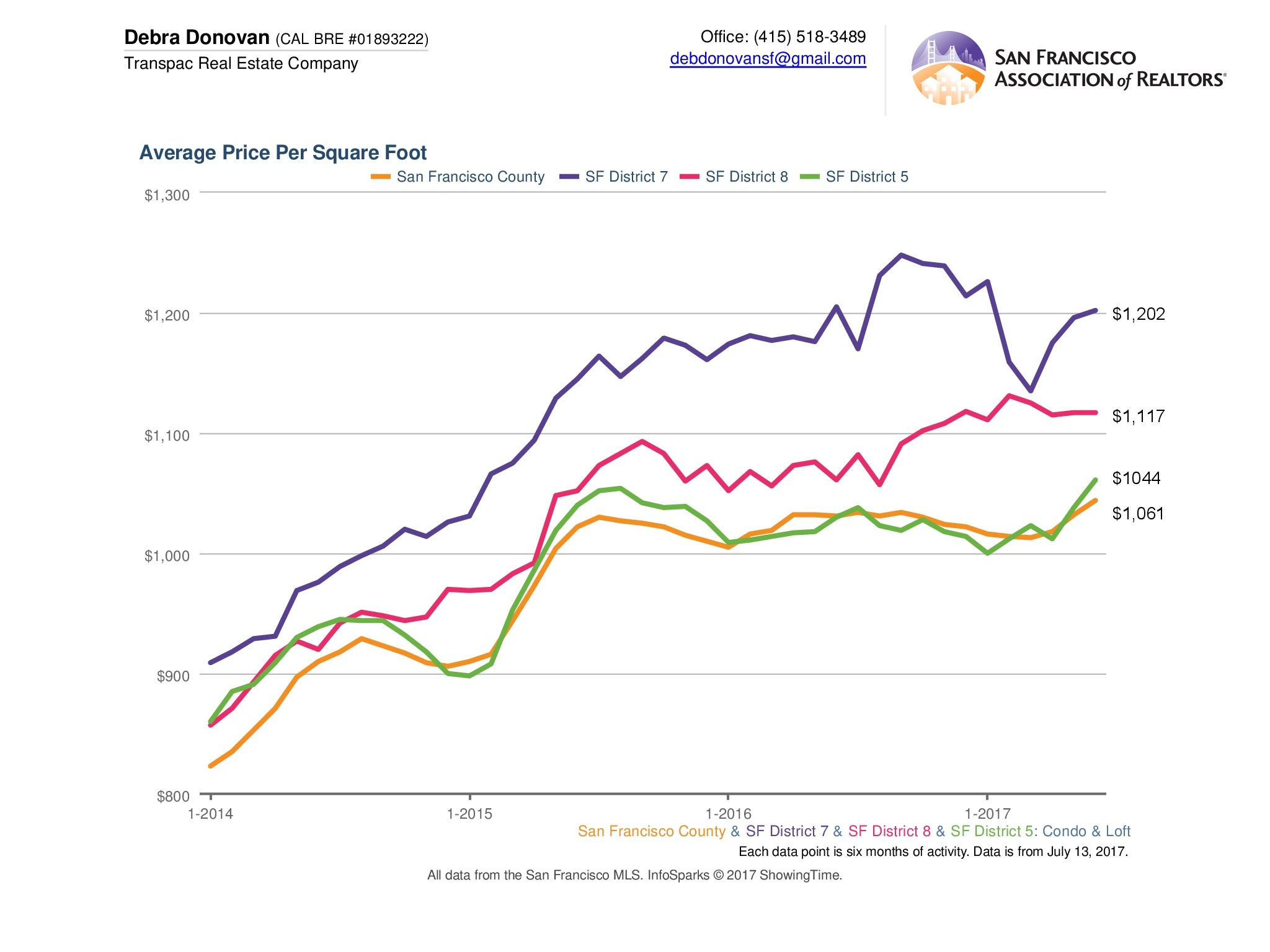 On the flip side, the districts with the lowest cost per square foot can be found in District 4 (Twin Peaks, Diamond Heights, West Portal and surrounding areas), District 3, and District 10.

It’s important to note that sometimes averages can be deceiving. For example, one very large sale in District 7 or 8 could skew the average up, while a couple of lower-priced homes could skew to the opposite. In June, District 10 had 3 BMR (Below Market Rate) home sales

The fine print: All information deemed reliable but not guaranteed or warranted. Data comes from MLS so does not include off-market and most new construction condo sales. The San Francisco real estate market is dynamic so statistics can change on a daily basis. These statistics are meant to be a snapshot of the time they were pulled.