2016 is officially a “wrap” and it’s time to look back on the past year to see how the San Francisco real estate market fared. Let’s delve into the numbers.

The market overall continued to increase, though primarily with single family homes. For this market segment, the year ended with a median price of $1,325,000, an increase of about 6% from the beginning of the year. Condos remained fairly flat and ended the year at a median price of $1,095,000, on par with January 2016’s median price of $1,100,000. It’s important to note here that this does not take into account many of the new condo projects that were completed and brought to market last year. These typically do not sell on the MLS, so are not included in this data. It’s likely, however, that these new projects did impact the numbers on this chart. There are very few new construction homes built in San Francisco but a number of new condo projects came to market in 2016. So condo resales essentially faced a bit of competition from new construction, which typically sell at a premium.  Similar to the condo market, TIC (Tenancy-in-Common) prices overall remained relatively flat to slightly down. 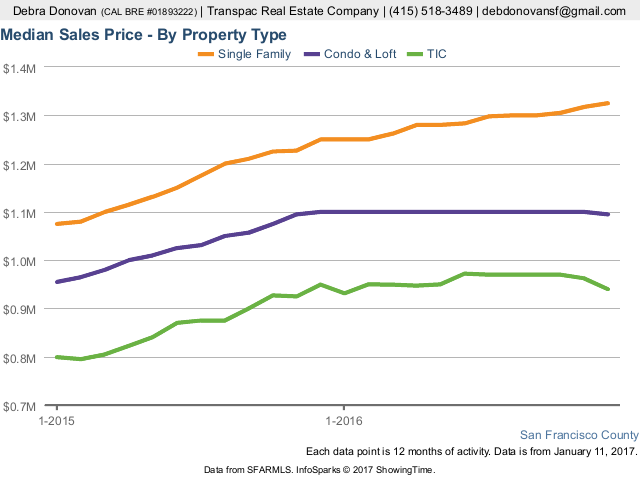 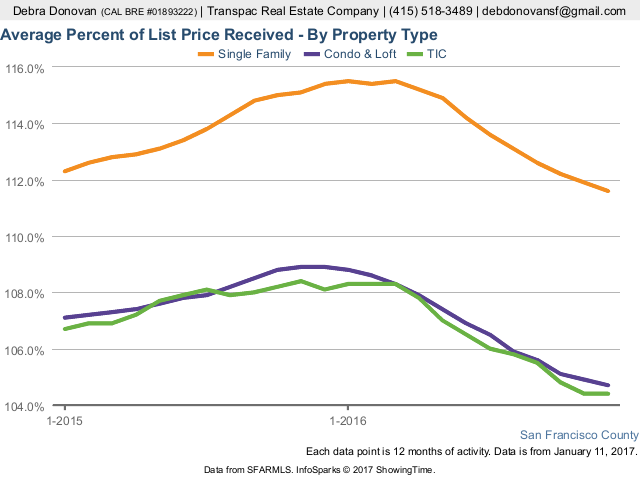 For the past several years, homes selling for over list price has been de rigeur. With demand far outpacing supply, buyers were forced to up the ante if they wanted to compete for a home. That trend continued throughout 2016, although the average percentage of sale price to list price lost a bit of steam toward the end of the year. For single family homes, after peaking at an average sales price of 115% of list price, the market relaxed a bit and ended the year at about an average of 109% list price.

Condos did not fair quite as well, peaking also in May 2016 with an average sales price of 106.5% of asking price, and then falling slightly to just under 102%. Again, this could be attributed in part to new inventory hitting the market.

Nevertheless, while many properties received fewer offers and buyers were less inclined to submit obscenely over-asking offers, home sellers for the most part did well in 2016.

Moving forward into 2017, expect single family homes to continue to be competitive as supply continues to be low and very few new single family homes are built. Increasing interest rates may affect the size of the buyer pool but demand will continue.